I have discussed Dr. Hansen before in this post. Within the realm of Climate Change he is often known as one of the chief alarmists and is the preferred scientist of Al Gore. It seems though that he made a prediction about aspects of New York City about twenty years ago, that like his climate predictions haven't come true. He knows this because he can look out his own office window and see they haven't even come close to being true. So has he recanted them.....of course not! So just what did he predict? This article from Watts Up With That explains:

The news today from the Pew Institute tells us that many Americans are backing away from the predictions of catastrophic climate change. This may be because many predictions simply haven’t come true.

Most, if not all, WUWT readers know Dr. James Hansen of GISS. He’s credited with jump starting the debate in 1988 with his now famous “sweaty” testimony before Congress in June 1988. See more about the stagecraft of that event here.

...He likely doesn’t remember this one interview he gave to a book author approximately 20 years ago, but fortunately that author recounted the interview on Salon.com. What is most interesting about this particular Hansen interview is that he dispenses with the usual models and graphs, and makes predictions about what will happen in 20 years to New York City, right in his own neighborhood. Sea level figures prominently.

In a 2001 interview with author Rob Reiss about his upcoming book “Stormy Weather” Salon.com contributor Suzy Hansen (no apparent relation to Jim Hansen) asks some questions about his long path of research for the book. One of the questions centered around an interview of Dr. James Hansen by Reiss around 1988-1989. Red emphasis mine.

Extreme weather means more terrifying hurricanes and tornadoes and fires than we usually see. But what can we expect such conditions to do to our daily life?

While doing research 12 or 13 years ago, I met Jim Hansen, the scientist who in 1988 predicted the greenhouse effect before Congress. I went over to the window with him and looked out on Broadway in New York City and said, “If what you’re saying about the greenhouse effect is true, is anything going to look different down there in 20 years?” He looked for a while and was quiet and didn’t say anything for a couple seconds. Then he said, “Well, there will be more traffic.” I, of course, didn’t think he heard the question right. Then he explained, “The West Side Highway [which runs along the Hudson River] will be under water. And there will be tape across the windows across the street because of high winds. And the same birds won’t be there. The trees in the median strip will change.” Then he said, “There will be more police cars.” Why? “Well, you know what happens to crime when the heat goes up.”

And so far, over the last 10 years, we’ve had 10 of the hottest years on record.

Didn’t he also say that restaurants would have signs in their windows that read, “Water by request only.”

Under the greenhouse effect, extreme weather increases. Depending on where you are in terms of the hydrological cycle, you get more of whatever you’re prone to get. New York can get droughts, the droughts can get more severe and you’ll have signs in restaurants saying “Water by request only.”

When did he say this will happen?

Does he still believe these things?

Yes, he still believes everything. I talked to him a few months ago and he said he wouldn’t change anything that he said then.

I’ve saved the Salon.com web page as a PDF also, here, just in case it should be deleted. So not only did Dr. Hansen make the claims in the late 1980’s, he reaffirmed his predictions again in 2001.

The scenario of the interview with Dr. Hansen looking out his window and describing the changes he envisions 20 years into the future is very plausible. As we established yesterday, Dr. Hansen’s NASA GISS office at 2880 Broadway in NYC, has a view of the Hudson River.

The NASA GISS building at 2880 Broadway and 112th Street.

(If that restaurant in the bottom right of the building seems familiar to you, I will
explain why at the end of this post. It may also explain why Dr. Hansen's
predictions are some what comical.)

Using Google Earth, I can actually fly right up to Dr. Hansen’s window and
recreate the view.

First let’s establish the location in traditional down looking map style view at
put Dr. Hansen’s line of sight on the image:

Here is a close in view, from further east on 112th street, just behind the GISS building looking northwest to the Hudson river. Google’s 3D buildings feature is used to recreate the buildings:

Here’s what the view from Dr. Hansen’s window at GISS looks like: And finally, here is the view from the Hudson, looking back to the GISS building: In the recounting of the interview by Rob Reiss, Hansen makes several claims about trees, birds, police cars, and crime. I can’t comment on those as I have no data. What I can comment on is this prediction by Dr. Hansen:

“The West Side Highway [which runs along the Hudson River] will be under water.”

As you can clearly see in the Google Earth images, the West Side Highway remains dry and open. Sea level (at which the Hudson River at that point becomes) is not encroaching on the highway. Note the date on the Google Earth timeline toolbar in the upper left. The aerial imagery was taken approximately 20 years later, on May 12th, 2008.

Even if we give Dr. Hansen the benefit of 30 years, I’ll point out that satellite measured rate of change of global sea level has slowed significantly in the last few years, and is not likely to rise enough to meet Dr. Hansen’s prediction even 30 years out. See this story.

In fact using the University of Colorado interactive sea level plotting tool, we can see virtually no trend in the last 20 years:

You can reproduce it here at sealevel.colorado.edu

I wonder what Dr. Hansen thinks when he looks out that window today?


Now back to why t hat restaurant in the bottom right of the building may have seemed so familiar. For over 10 years on many of our televisions we saw these people eat in there nightly (or more often depending on re-runs) . 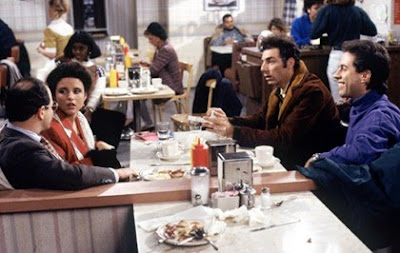 Yes that's right it is "Monk's" from the long running comedy Sienfeld. So what about Dr. Hansen's comical predictions? Well maybe he has been listening to often to the well meaning advice offered by this citizen: 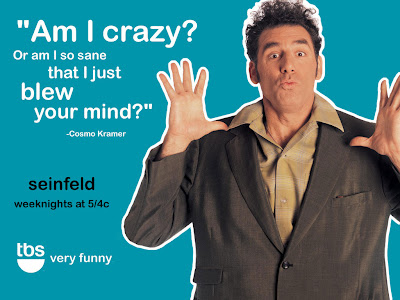 I seems he might! It also could also explain a lot!
Posted by Climate Observer at 6.11.09