Stinks Of Desperation By The Alarmists.

In my previous post entitled Failing To Convince, Climate Activists Threaten Instead, I examined how the pro climate change activists and extremists had ramped up their use of direct threats to those who had dared to challenge their position. At the end of September 2010 a UK organisation called 10:10 released a movie to YouTube that depicted people who failed to instantly sign up to their campaign of reducing carbon emissions by 10% being exploded and their detritus being splattered all over those believers who stood near them (presumably as a warning never to disagree again or face the same fate). I will link to a copy of the video here, however, I do so with this warning: This film contains scenes that some viewers may find distressing. Not suitable for children

After its released10:10 released the following statement.

Sorry.
Today we put up a mini-movie about 10:10 and climate change called 'No Pressure'.

With climate change becoming increasingly threatening, and decreasingly talked about in the media, we wanted to find a way to bring this critical issue back into the headlines whilst making people laugh. We were therefore delighted when Britain's leading comedy writer, Richard Curtis - writer of Blackadder, Four Weddings, Notting Hill and many others – agreed to write a short film for the 10:10 campaign. Many people found the resulting film extremely funny, but unfortunately some didn't and we sincerely apologise to anybody we have offended.

As a result of these concerns we've taken it off our website.

We'd like to thank the 50+ film professionals and 40+ actors and extras and who gave their time and equipment to the film for free. We greatly value your contributions and the tremendous enthusiasm and professionalism you brought to the project.

At 10:10 we're all about trying new and creative ways of getting people to take action on climate change. Unfortunately in this instance we missed the mark. Oh well, we live and learn.

But 10:10 are not alone in their use of controversial images. This poster is from ACT Responsible, (a Left-wing advertising executive group) used this for a Cannes conference: 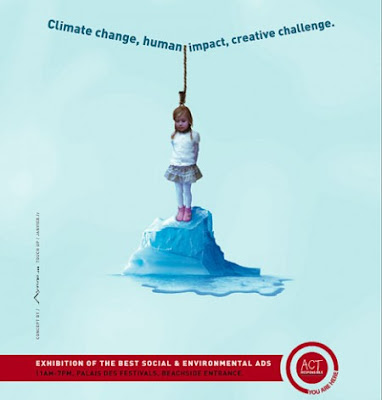 And this video designed to scare children was used to open the Copenhagen conference in 2009:

In another act of desperation of different kind, is the Climate Change Committee put together by the Gillard Government of Australia and their new coalition partners The Greens. As Herald Sun Columnist Andrew Bolt reports in his article Gillard rigs her warming “consensus”:

The fix is in, and shame on any commentator who falls for this childish spin:

Ms Gillard said the committee would start from the position that a carbon price was required to reduce pollution and encourage investment in low-emission technologies.

Note already that the committee skips what should be the start of any discussion. As in: is a carbon price actually worth the pain? Will cutting our emissions actually achieve anything? Is a rise in global temperatures actually good for us? Isn’t it suicidal to slash our tiny emissions before the rest of the world - and especially the biggest emitters - agree to do likewise?

So right away this committee is fundamentally rigged to dodge debate and produce the “right” result. What’s sold by Gillard as an exercise to achieve “community consensus” is a con - this is the consensus you reach simply by excluding everyone who doesn’t agree with you. In fact, Gillard today made that explicit:

“Parliamentary members of the committee will be drawn from those who are committed to tackling climate change and who acknowledge that effectively reducing carbon pollution by 2020 will require a carbon price,” Ms Gillard said.

This is why the Coalition will not be taking up of the offer of two seats on the committee, which will be stacked instead by ideologues, including Greens leader Bob Brown:

There will also be two Greens and representation from the independent MPs. Independent Tony Windsor already has indicated his willingness to be a member of the committee.

Another con. On the committee’s agenda will be the carbon “levy” - actually tax - that Gillard repeatedly ruled out before the election, when there were nervous voters to fool:

The committee will consider mechanisms for introducing a carbon price, including a broad-based emissions trading scheme, carbon levy, or a hybrid of both.

Contrast that to this solemn promise of just six weeks ago:

There will be no carbon tax under the government I lead.

A carbon tax is actually a demand of the Greens, which now seems in charge of Labor’s global warming agenda. After all, Ross Garnaut had already done an extensive report for the then Rudd Government on exactly these questions, among others, and settled on an emissions trading scheme. Holding yet another inquiry just buys Labor more time for further delay, but also offers the Greens a prize - the hope of getting something even tougher and more damaging to our economy. Note that this committee aims to produce a “consensus” among its members (two of them Greens) that will actually form the Government policy.

But let’s get to the remaining deceit here. The four “independent experts” appointed by Gillard to advise the committee include people who are either not expert (in global warming policies, at least) or not independent.

Take Patricia Faulkner, who has no expertise in global warming policies at all and seems to have been chosen instead for her Leftism, social activism and bureaucratic skills - all the hallmarks of a classic apparatchik:

Patricia Faulkner has had an extensive career covering both the public and private sectors. She is currently the chair of the Australian Social Inclusion Board and the Chair of Jesuit Social Services. Jesuit Social Services is a small welfare based organisation that looks after people at the margins of society. She is also a Chair and Member of a range of health care and government advisory services boards, including the Federal Government Health and Hospitals Infrastructure Fund; and, the Council of Australian Governments Reform Council. She has spent 10 of the last 20 years as a partner with KPMG leading both their health and social policy sectors.

Then there’s the alarmist Will Steffen, who is indeed a climate scientist, but not one independent of this Government;

Professor Will Steffen is Executive Director of the ANU Climate Change Institute at the Australian National University (ANU), Canberra, and is also Science Adviser to the federal Department of Climate Change and Energy Efficiency.

Add Treasurer Wayne Swan to the committee, and the Government’s global warming policy is being decided (so far) by three Labor ministers, two Greens and an independent who knows little about global warming but is sure we must Do Something. And the six of them will be guided by four experts who turn out to be an alarmist scientist, a welfare activist, a big business representative and an alarmist economist.

This committee is little better than a propaganda outfit, designed to sell a “solution” already agreed upon in the broad - and which in detail may break one of Gilllard’s most solemn election promises. The “community consensus” it pretends to be developing is no more than a fix and a fraud.

Julia Gillard, September 9. on her deal with the independents:

Indeed, this process, born of parliamentary deadlock, has resulted in more openness, transparency and reform in how we conduct our Parliament and the business of government than at any other time on modern Australian politics. Throughout this process of forming a new government we’ve been open with the Australian people. To quote Rob Oakeshott, sunshine is the best disinfectant, and we’ve agreed to far-reaching reforms that make me as Prime Minister and our government and how it functions more accountable to the Australian people. So, let’s draw back the curtains and let the sun shine in; let our parliament be more open than it ever was before. That’s real reform, and that’s the direct result of the election.

Julia Gillard, September 27, on her deal with the Greens for this climate committee:

Yet when other non Green Senators express interest in joining this Labor/Green committee, this was the result (again via Andrew Bolt):

The Leninism of the Greens is revealed - and their power over Gillard, too:

THERE was no room for Nick Xenophon on the government’s multi-party climate change committee...

Climate Change Minister Greg Combet ... said the committee, chaired by Julia Gillard, was “small and tightly focused” and there was no room for anyone else, even though the Coalition had refused to fill two seats set aside for it…

Senator Xenophon said he was bitterly disappointed that despite writing and making representations to the Prime Minister and Mr Combet requesting a seat, he was excluded from the committee.

Sources close to Senator Xenophon said at least two Labor Party figures had told him “the Greens vetoed his presence”.

“Christine Milne was fingered as the one who insisted Nick not be on the committee,” a well-placed source said.

A spokesman for Senator Milne yesterday said the claim was “untrue”. South Australian Greens senator Sarah Hanson-Young said there was “no space available” for Senator Xenophon on the committee. “The committee decides that, and at this stage he’s not on there.”

Wasn’t this a committee to build “consensus” on global warming policies? Not only does it exclude those who disagree with the Greens position that we must put a price on carbon dioxide emissions, but now it’s excluding those who might challenge Greens power, too.

And this (again via Andrew Bolt) :

“I thought it was important that we harness community members to rebuild a broad general public consensus on how to tackle climate change, how to price carbon,’’ she said.

Somehow the citizens assembly seemed to have more integrity to it.

It all stinks of desperation from those that committed themselves to a course of action, yet have failed to convince the public that theirs is the right course of action. So instead they use either threats, violence or stacked committees to bluff, cagoule or simply scare the public to their view point. The question must always be asked, if the science was settled and so very convincing, why is there the need for all of this other stuff. Surely presenting the undeniable facts would be enough and would leave anyone denying them looking foolish. Yet they haven't been able to do that so now they resort to type.
Posted by Climate Observer at 10.10.10