I recently was using the site Wood For Trees after it was suggested to me that there indeed had been either a plateau in temperatures for the last ten years or indeed a small fall depending on which of the four main temperature data sets (GISTEMP, HadCRUT3, UAH and RSS) you chose to use as a reference. I wanted to see for myself and this is what I found:

GISTEMP, despite all the manipulation that James Hansen has put into his data set over the years and the amount of divergence it has achieved compared to the other data sets it shows that for the past ten years there has been no rise in temperature: 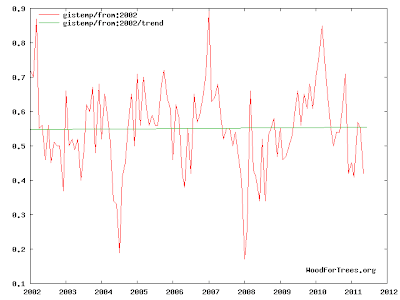 This conclusion is supported by the UAH temperature data set: 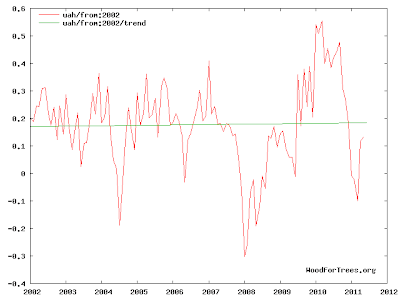 Yet when we examine the data set from HadCRUT 3 we can see there is indeed a fall in temperature over that period: 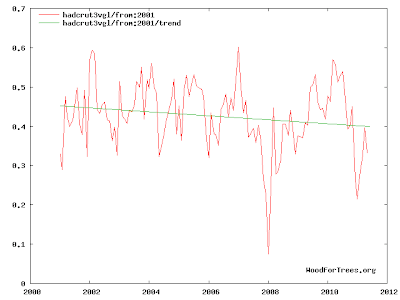 And this decrease is repeated when we use the RSS data set: 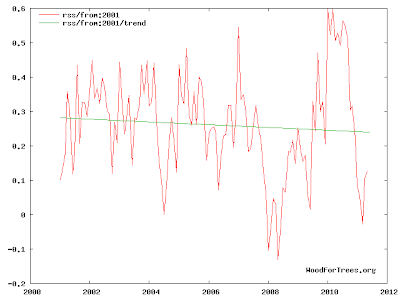 Now via Watts Up With That comes a peer reviewed study that says that "global surface temperatures did not rise between 1998 and 2008."

The Kaufmann et al 2011 paper (Note: Michael L. Mann is a co-author, not the same as Michael E. Mann of hockey team fame) was embargoed until 8PM GMT (12PM PDT) today, and we have an advance copy thanks to Dr. Benny Peiser .

The headline from the abstract:

Given the widely noted increase in the warming effects of rising greenhouse gas concentrations, it has been unclear why global surface temperatures did not rise between 1998 and 2008.

But in the conclusion:

Comments by Dr David Whitehouse on the PNAS paper Kaufmann et al.Reconciling anthropogenic climate change with observed temperature 1998 – 2008.It is good news that the authors recognise that there has been no global temperature increase since 1998. Even after the standstill appears time and again in peer-reviewed scientific studies, many commentators still deny its reality. We live in the warmest decade since thermometer records began about 150 years ago, but it hasn’t gotten any warmer for at least a decade.

The researchers tweak an out-of-date climate computer model and cherry-pick the outcome to get their desired result. They do not use the latest data on the sun’s influence on the Earth, rendering their results of academic interest only.

They blame China’s increasing coal consumption that they say is adding particles into the atmosphere that reflect sunlight and therefore cool the planet.

The effect of aerosols and their interplay with other agents of combustion is a major uncertainty in climate models. Moreover, despite China’s coal burning, data indicate that in the past decade the amount of aerosols in the atmosphere has not increased.

The researchers seek to explain the temperature standstill between 1998 and 2008. They say that the global temperature has increased since then.This is misleading. There was an El Nino in 2010 (natural cyclic warming) but even that did not raise temperatures above 1998. In fact the standstill has continued to 2010 and 2011 appears to be on course to be a cooler year than any of the preceding ten years.
Tweaking computer models like this proves nothing. The real test is in the real world data. The temperature hasn’t increased for over a decade. For there to be any faith in the underlying scientific assumptions the world has to start warming soon, at an enhanced rate to compensate for it being held back for a decade.Despite what the authors of this paper state after their tinkering with an out of date climate computer model,
there is as yet no convincing explanation for the global temperature standstill of the past decade.


This is not an extreme or ‘sceptic’ position but represents part of the diversity of scientific opinion presented to the IPCC that is seldom reported.