There is a saying that nothing sells newspapers like bad news. Since the start of the current climate debate it is rare for there to be a good news climate story, most will concentrate on any story that is promoting gloom and doom, or even rampant alarmism, as can be seen here in the Climate Change section of The Age newspaper.

But the next time you see a story involving Ice bergs in unusual locations, shrinking ice in the Arctic with ships able to travel where they never have before, less seals or polar bears, penguins showing up in countries like France, less snow on the Matterhorn, or just generally weird weather, just remember it has been reported before and there isn't "unprecedented" as is so often claimed.

Some examples of previous stories include:
1846: 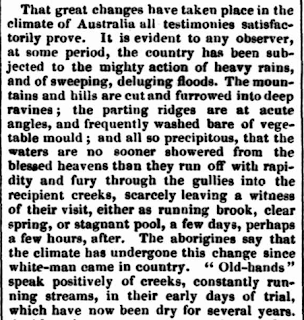 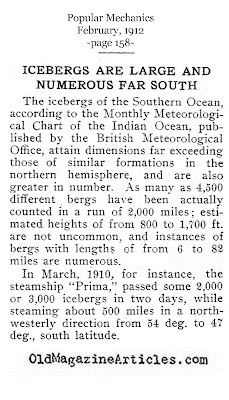 Of course in April 1912 a very famous iceberg was to strike the Titanic (who thought they were well south of the known Iceberg zone). 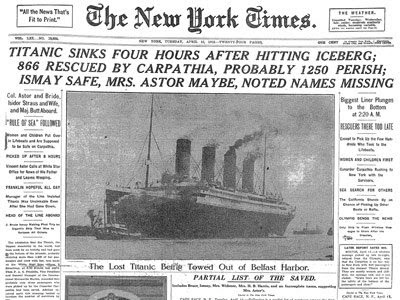 Should something similar happen today it would be reported as "proof" of Climate Change.

1922:The following report was on the warming of the Arctic: 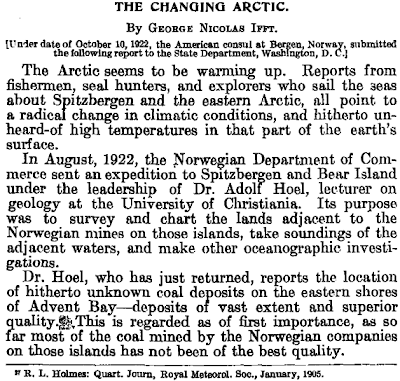 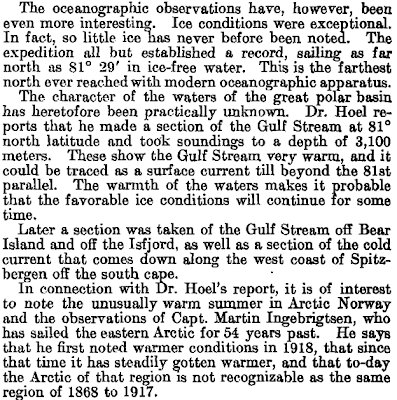 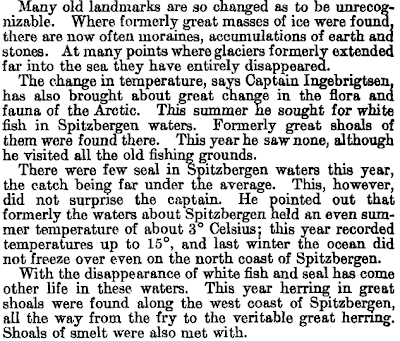 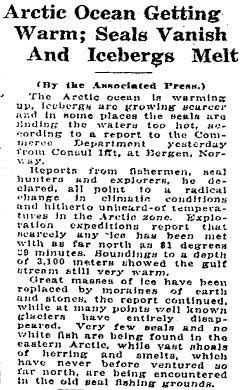 The same year penguins were reported as landing in France. 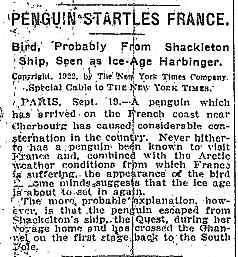 A similar Penguin occurrence happened only a few years ago in Brazil and it was widely touted as "undeniable proof" of Climate Change by the media. As for the reporting done by the Washington Post about vanishing seals and icebergs just ten years after one sank the Titanic is reminiscent of the type of reporting we see much more of today.
1930's: The following report is of a temperature rise seen world wide: 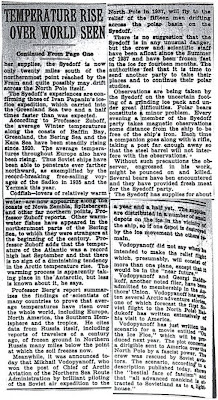 Then in 1932 (a mere twenty years after the Titanic sinking by an iceberg comes this report of Russians successfully circumnavigating a section of the Arctic that had never been done before.

At the same time in the US it was the "Grapes of Wrath" drought years and there were reports of climate refugees: 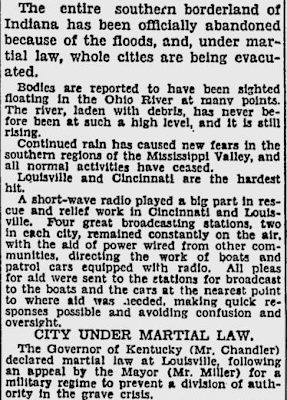 By 1938 there were reports citing data collected by the Russians in the Arctic that the world was indeed getting warmer. Despite the advent of the industrial revolution by more than seventy years at this stage there was no thought to blame man's emissions of CO2. 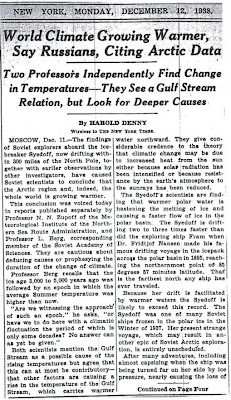 By 1947 a familiar tune to today was being sung in the Fairfax newspapers: 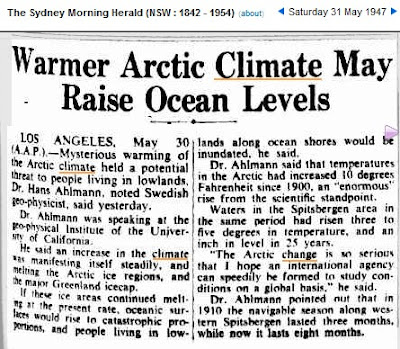 But at the time little did they realise that the climate had already turned to a cooling cycle. The same paper that had reported on eight years earlier that the Arctic was melting away and was going to drown us all was now reporting a weirding of the weather because it was raining so much and was getting colder. They quoted the same sources as today in the CSIRO who said it was "clear proof that our weather wasn't as it use to be." 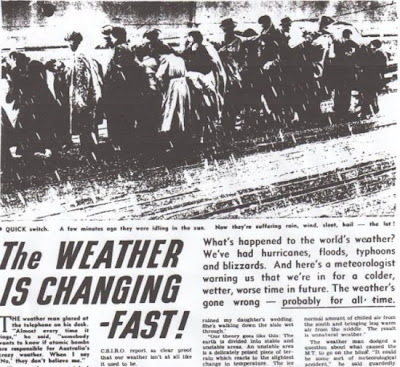 By the mid 1970's the tune had changed dramatically. We were all still doomed by Climate Change only now it was because of the impending Ice Age not that silly warming that we had experienced back in the 1930's and 40's. The late Professor Stephen Schneider was big on this theory. He was also the one who later said:
"On the one hand we are ethically bound to the scientific method, in effect promising to tell the truth, the whole truth, and nothing but…which means that we must include all the doubts, caveats, ifs and buts.


On the other hand, we are not just scientists, but human beings as well. And like most people we’d like to see the world a better place, which in this context translates into our working to reduce the risk of potentially disastrous climate change. To do that we have to get some broad-based support, to capture the public’s imagination. That, of course, entails getting loads of media coverage. So we have to offer up scary scenarios, make simplified, dramatic statements, and make little mention of any doubts we might have."
1974 and 75: 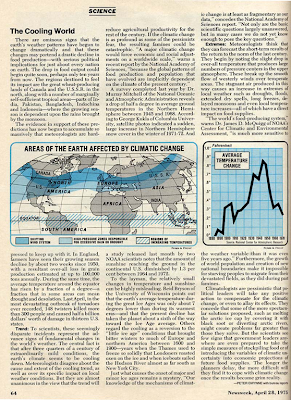 TIME Magazine June 1974: Another Ice Age?
In Africa, drought continues for the sixth consecutive year, adding terribly to the toll of famine victims. During 1972 record rains in parts of the U.S., Pakistan and Japan caused some of the worst flooding in centuries. In Canada’s wheat belt, a particularly chilly and rainy spring has delayed planting and may well bring a disappointingly small harvest. Rainy Britain, on the other hand, has suffered from uncharacteristic dry spells the past few springs. A series of unusually cold winters has gripped the American Far West, while New England and northern Europe have recently experienced the mildest winters within anyone’s recollection.
University of Toronto Climatologist Kenneth Hare, a former president of the Royal Meteorological Society, believes that the continuing drought and the recent failure of the Russian harvest gave the world a grim premonition of what might happen. Warns Hare: “I don’t believe that the world’s present population is sustainable if there are more than three years like 1972 in a row.”

Yet by the 1980's Professor James Hansen was again warning of Global Warming and that it was going to kill us all if we did nothing about it. Slowly the media began to change it reporting once again. This was despite other climate scientists saying that this warming had happened before and was worse back then: 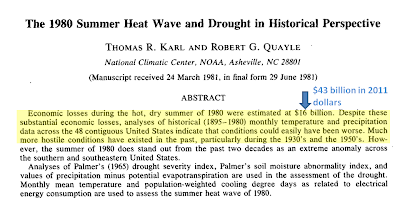 Imagery was the key to getting people to believe this time and shots such as the following were used to show proof of Global Warming: 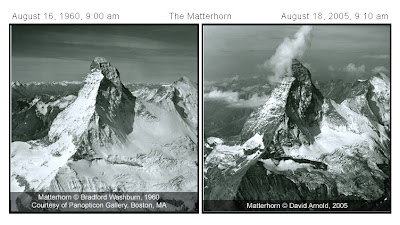 How could anyone deny this was nots so when the evidence was so clear, yet if we look at the same Matterhorn from2011 we see something closer to 1960 than 2005: 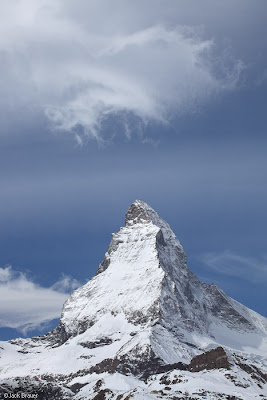 How strange we are not shown this shot in comparison with the 2005 photo as "proof" that the Earth has recovered or that another Ice age is on it's way.
Istead we are now presented in the form of blizzards as "undeniable proof" and further signs of Global Warming despite the world again not having warmed for the last 10 to 15 years. 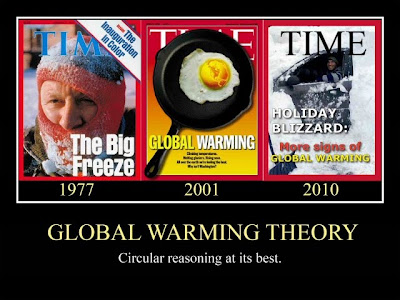 I thing the caption on the poster says it all.