Polar Bears have long since been the symbol of choice of the pro Climate Change advocates. As can be seen in these sample images: 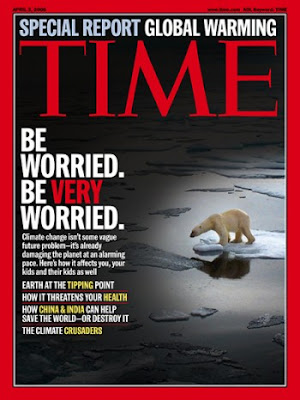 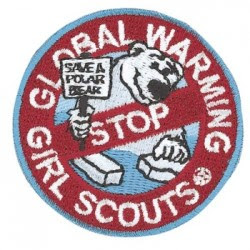 We are told time and again that they are dying out due to man made climate change, because their home is melting. Yet once again the truth is far from the image being portrayed:

Nunavut Government Study:"the[polar] bear population is not in crisis as people believed," 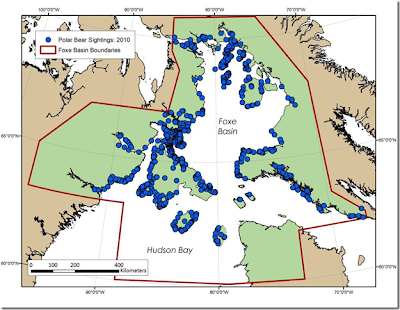 From the Daily Globe and Mail in Canada:

The debate about climate change and its impact on polar bears has intensified with the release of a survey that shows the bear population in a key part of northern Canada is far larger than many scientists thought, and might be growing.

The number of bears along the western shore of Hudson Bay, believed to be among the most threatened bear subpopulations, stands at 1,013 and could be even higher, according to the results of an aerial survey released Wednesday by the Government of Nunavut. That’s 66 per cent higher than estimates by other researchers who forecasted the numbers would fall to as lowas 610 because of warming temperatures that melt ice faster and ruin bears’ ability to hunt. The Hudson Bay region, which straddles Nunavut and Manitoba, is critical because it’s considered a bellwether for how polar bears are doing elsewhere in the Arctic.

I located the survey done by the Government of Nunavut, here:

It seems sound in methodology. Some excerpts from it are posted below.

Polar bear population assessment in North America has historically relied on physical mark-recapture. These studies are logistically and financially intensive, and while widely accepted in the scientific community, local Inuit have voiced opposition to wildlife handling. To better reflect Inuit values and provide a rapid tool for monitoring polar bear population size, we developed and implemented an aerial survey in the Foxe Basin subpopulation (FB) during late summer, 2009 and 2010. FB, a seasonally ice-free subpopulation, spans some 1.1 million km2 in Nunavut. Polar bears concentrate along the coast during late summer, so we delineated survey zones based on proximity to the coastline.

We used coastal contour transects, inland transects oriented perpendicular to the coast, and total counts on a sample of small islands and ice floes. We focused effort in the high-density coastal region and designed protocols to enable simultaneous collection of double-observer and distance sampling data from a helicopter. We flew >300 hours and 40,000 km during each year’s survey and observed 816 and 1,003 individuals in 2009 and 2010, respectively. In both years, we observed high numbers of bears on islands in northern Foxe Basin and on Southampton Island, neighboring islands and near Lyon Inlet.

Encounter rates were highest near the coast, although bears were observed >40 km inland. The shape of the detection function differed substantially between years, likely attributable to observer experience and variable sighting conditions. However, our abundance estimates were highly consistent between years and survey methods, (~2,580 bears (95% CI: about 2,100 –3,200), and were comparable to an estimate from the early 1990s. Our results suggest that

Whereas mark−recapture data provide direct estimates of population growth, aerial survey data yield information population on trend only via a time series of population estimates; accordingly, reliance on such data may require more conservative harvest management. The FB aerial surveys provide a framework for future studies during the ice-free season. Ongoing analysis will evaluate the distribution of bears in Foxe Basin and assess alternatives for long-term monitoring. 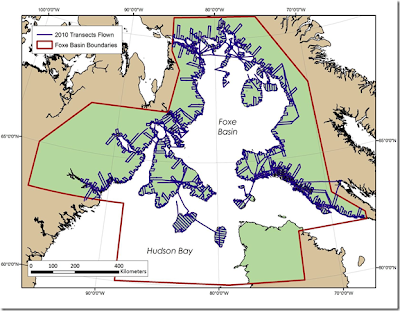 The distribution of polar bears was generally consistent between years (Figure 3). High concentrations of bears were observed in central Foxe Basin near Lyon Inlet and on Southampton Island and neighboring Coats, Vansittart, and White Islands and in northern Foxe Basin on Rowley, Koch, Prince Charles, and the Spicer Islands. Relatively few bears were spotted along Hudson Strait and in the Bowman Bay region of western Baffin Island, and sightings were rare near communities. Bears were most frequently observed along coastal contour transects, in the nearshore inland stratum and on large and small islands, but sightings were documented across all strata (Figure 3).

Total Abundance
Despite different analytical techniques and detection functions, the four preliminary abundance estimates were remarkably consistent (Table 2). Model averaging yielded a preliminary overall abundance estimate of about 2,580 bears in the Foxe Basin subpopulation, with a 95% lognormal confidence interval of 2,093 to 3,180 (CV: 10.7%).

Survey done by the Government of Nunavut, here:

It seems like a superior methodology to say, seeing three drowned polar bears at sea after a storm and then extrapolating that to the entire population like one now discredited and disgraced researcher did. Of course, honest science like what was done in this survey doesn’t make headlines or wailing and gnashing of teeth by NGO’s and Al Gore, and even Science magazine who much prefer to stick to the view of a declining Ursus Bogus population:

Back to the Globe and Mail article:

The study shows that “the bear population is not in crisis as people believed,” said Drikus Gissing, Nunavut’s director of wildlife management. “There is no doom and gloom.”

Mr. Gissing added that the government isn’t dismissing concerns about climate change, but he

said Nunavut wants to base bear-management practices on current information “and not predictions about what might happen.”

The debate over the polar-bear population has been raging for years, frequently pitting scientists against Inuit. In 2004, Environment Canada researchers concluded that the numbers in the region had dropped by 22 per cent since 1984, to 935. They also estimated that by 2011, the population would decrease to about 610. That sparked worldwide concern about the future of the bears and prompted the Canadian and American governments to introduce legislation to protect them.

But many Inuit communities said the researchers were wrong. They said the bear population was increasing and they cited reports from hunters who kept seeing more bears. Mr. Gissing said that encouraged the government to conduct the recent study, which involved 8,000 kilometres of aerial surveying last August along the coast and offshore islands.

What I found most interesting is the clear message that polar bears are thriving in an environment where sea ice (NSIDC includes Hudson Bay as sea ice) seasonally disappears entirely. 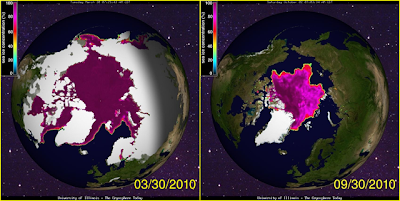 Note in the Cryosphere Today comparison image above, Hudson Bay is completely ice free around the time of Arctic maximum melt ~ Sept 30.

It seems the Polar bears can adapt to non-existent sea ice and do just fine.

Scientists predict that Arctic summers could be ice-free by the middle of this century-without sea ice, polar bears cannot survive.

Or this one from Polar Bears International

Asked by CNSNews.com about the IUCN body’s findings regarding populations remaining stable, Buchanan pointed out the group’s acknowledgment of insufficient data in some of the 19 sub-populations. He concluded that “without ice polar bears can’t survive.”