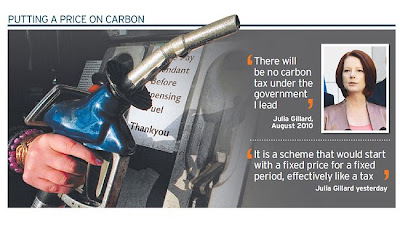 In the Australian Federal Election campaign in 2010 the current Prime Minister of Australia Julia Gillard announced that "there will be no Carbon Tax under the government I lead!", yet in February 2011 she announced plans for a carbon dioxide tax (referred to decitfully as a "Carbon" Tax) in coalition with her new Green partners in government. At first she denied she had lied to the public about introducing this tax, but eventually conceeded that she had indeed "changed her position"and sought to introduce a Carbon Tax.

As part of the debate that has continued in Australia since that announcement was these two interviews conducted by radio staion 2GB's Chris Smith with firstly Dr. John Christy and then Professor Richard Lindzen on whether Australia needs to introduce a Carbon (read Carbon Dioxide) Tax.

Both are very informative an well worth listening to: