How GISTEMP Produce Their Fudged Data.

In part of my previous post it examined the unusual hot spot over Bolivia and the Northwest Territory of Canada on the GISTEMP map. In this one Willis Eschenbach writing a guest post on Watts Up With That examines this in more detail with his article: GISScapades.

GISS is the Goddard Institute for Space Studies, a part of NASA. The Director of GISS is Dr. James Hansen. Dr. Hansen is an impartial scientist who thinks people who don’t believe in his apocalyptic visions of the future should be put on trial for “high crimes against humanity”. GISS produces a surface temperature record called GISTEMP. Here is their record of the temperature anomaly for Dec-Jan-Feb 2010 : 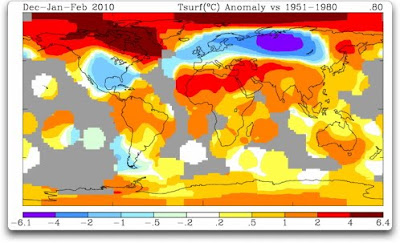 Figure 1. GISS temperature anomalies DJF 2010. Grey areas are where there is no temperature data.

Now, what’s wrong with this picture?

The procedure is one that is laid out in a 1987 paper by Hansen and Lebedeff In that paper, they note that annual temperature changes are well correlated over a large distance, out to 1200 kilometres (~750 miles).

(“Correlation” is a mathematical measure of the similarity of two datasets. It’s value ranges from zero, meaning not similar at all, to plus or minus one, indicating totally similar. A negative value means they are similar, but when one goes up the other goes down.)

Based on Hansen and Lebedeff’s finding of a good correlation (+0.5 or greater) out to 1200 km from a given temperature station, GISS show us the presumed temperature trends within 1200 km of the coastline stations and 1200 km of the island stations. Areas outside of this are shown in gray. This 1200 km. radius allows them to show the “temperature trend” of the entire Arctic Ocean, as shown in Figure 1. This gets around the problem of the very poor coverage in the Arctic Ocean. Here is a small part of the problem, the coverage of the section of the Arctic Ocean north of 80° North: 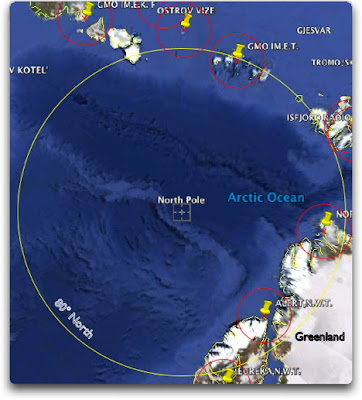 Figure 2. Temperature stations around 80° north. Circles around the stations are 250 km (~ 150 miles) in diameter. Note that the circle at 80°N is about 1200 km in radius, the size out to which Hansen says we can extrapolate temperature trends.

Can we really assume that a single station could be representative of such a large area? Look at Fig.1, despite the lack of data, trends are given for all of the Arctic Ocean. Here is a bigger view, showing the entire Arctic Ocean. 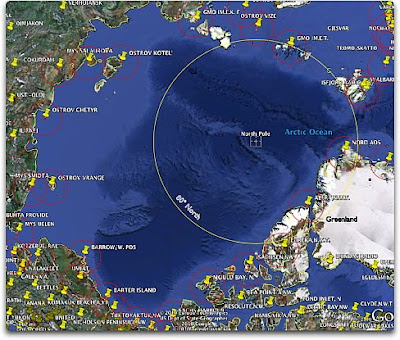 Figure 3. Temperature stations around the Arctic Ocean. Circles around the stations are 250 km (~ 150 miles) in diameter. Note that the area north of 80°N (yellow circle) is about three times the land area of the state of Alaska.

What Drs. Hansen and Lebedeff didn’t notice in 1987, and no one seems to have noticed since then, is that there is a big problem with their finding about the correlation of widely separated stations. This is shown by the following graph: 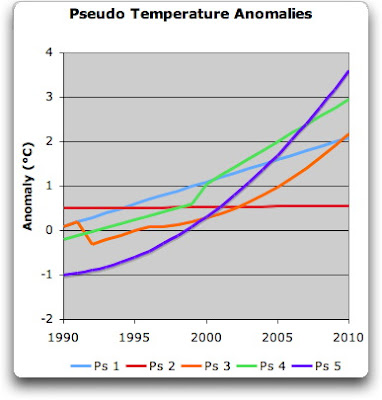 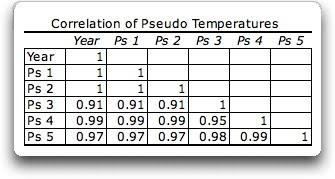 Figure 5. Correlation between the pseudo temperature datasets shown in Fig. 3

The inescapable conclusion from this is that high correlations between datasets do not mean that their trends are similar.

Glad you asked … here are nineteen fifty-year long temperature datasets from Alaska. All of them have a correlation with Anchorage greater than 0.5 (max 0.94, min 0.51, avg 0.75). These are their trends: 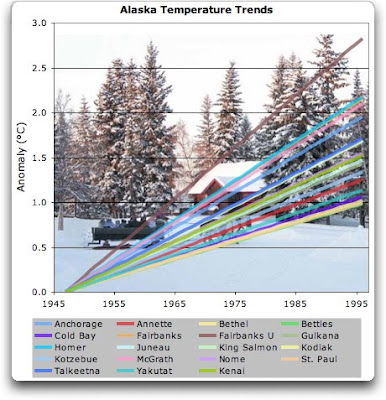 As you can see, the trends range from about one degree in fifty years to nearly three degrees in fifty years. Despite this huge ~ 300% range in trends, all of them have a good correlation (greater than +0.5) with Anchorage. This clearly shows that good correlation between temperature datasets means nothing about their corresponding trends.

Finally, as far as I know, this extrapolation procedure is unique to James Hansen and GISTEMP. It is not used by the other creators of global or regional datasets, such as CRU, NCDC, or USHCN. As Kevin Trenberth stated in the CRU emails regarding the discrepancy between GISTEMP and the other datasets (emphasis mine):

My understanding is that the biggest source of this discrepancy [between global temperature datasets] is the way the Arctic is analyzed. We know that the sea ice was at record low values, 22% lower than the previous low in 2005. Some sea temperatures and air temperatures were as much as 7C above normal. But most places there is no conventional data. In NASA [GISTEMP] they extrapolate and build in the high temperatures in the Arctic. In the other records they do not. They use only the data available and the rest is missing.

No data available? No problem, just build in some high temperatures …

[Update 1] Fred N. pointed out below that GISS shows a polar view of the same data. Note the claimed coverage of the entirety of the Arctic Ocean. Thanks. 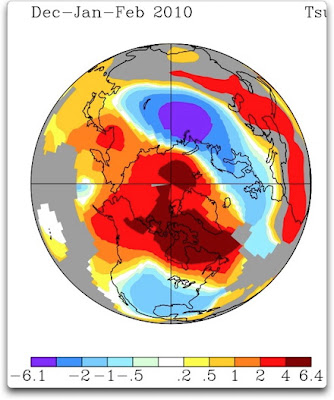