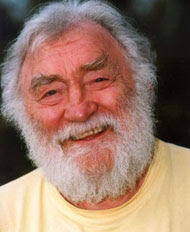 Professor David Bellamy(seen above) found yet another Gore error, not from his film this time, but as usual from his mouth.
One of Gore's biggest clangers was saying that the Aral Sea in Uzbekistan was drying up because of global warming.
Well, everyone knows, because it was all over the news 20 years ago, that the Russians were growing cotton there at the time and that for every tonne of cotton you produce you use a vast amount of water. The thing that annoys me most is that there are genuine environmental problems that desperately require attention. I'm still an environmentalist, I'm still a
Green and I'm still campaigning to stop the destruction of the biodiversity of the world. But money will be wasted on trying to solve this global warming "problem" that I would much rather was used for looking after the people of the world.

Yet it is Dr. Bellamy and not Al Gore that is attacked by alarmists and deep green journalists like George Monbiot as being out of touch.