In an earlier post I discussed the infamous Mann's Hockey Stick graph that wiped out the medieval warm period and was the basis of the IPCC's third assessment report. After being famously debunked by Steve McIntyre and Ross McKitrick it was removed from the IPCC's 4th and most recent assessment report. Mann tried to reintroduce it in a modified form, but this too was debunked by Steve McIntyre. Still the Hockey stick controversy continued as Dr. Mann and the supporters of climate change claimed the McIntyre had debunked nothing.

In late September of 2009 this controversy has again flared after Steve McIntyre was finally able to access the tree ring data sets used by Professor Kieth Briffa (of the Climate Research Unit - East Anglia and one of Dr. Mann's co authors) to formulate his hockey stick temperature graphs. McIntyre released a blog post on his Climate Audit blog, showing that he believed that Professor Briffa had selected a limited number of trees to base his hockey stick evidence on(a selection which proved to be far from random). When the other trees (the rejected ones) from the same area (Yamal in northern Russia) were included the hockey stick shape, disappears (as seen below - the red is the original, the black is the other trees and the green is the combined).

Naturally, claim and counter claim is being made by both sides of the divide (along party lines as it were) since the release of this information. A good summary of the current situation (showing both sides opinion) is contained on Joe D'Aleo's ICECAP blog entitled Can’t See the Forest for the Trees. So, just in case you have missed it on ther blogs - here it is :

At issue is the use of tree rings as a temperature proxy, or dendrochronology. Using statistical techniques, researchers take the ring data to create a “reconstruction” of historical temperature anomalies. But trees are a highly controversial indicator of temperature, since the rings principally record CO2, and also record humidity, rainfall, nutrient intake and other local factors. Picking a temperature signal out of all this noise is problematic, and a dendrochronology can differ significantly from instrumented data. In dendro jargon, this disparity is called “divergence”. The process of creating a raw data set also involves a selective use of samples - a choice open to a scientist’s biases.—by Andrew Orlowski, UK Register, September 29, 2009

Media reaction to the Yamal story has been rather limited so far. I’m not sure whether this is because people are trying to digest what it means or whether it’s “too hot to handle”. None of the global warming supporters in the mainstream media have gone near it. The reaction of the Guardian - to delete any mention of the affair from their comment threads - has been extraordinary. --Bishop Hill, 1 October 2009

Read all the details of the Yamal issue from both sides in these links:

YAD06 - the Most Influential Tree in the World by Steve McIntyre 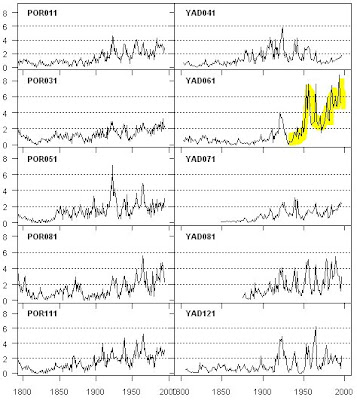 Watts responds in part: “As McIntyre points out: “YAD061 reaches 8 sigma and is the most influential tree in the world.” Seems like an outlier to me when you have one tree that can skew the entire climate record. Explain yourself on why you failed to catch this. Why the hell did you wait 10 years to release the data? You did yourself no favors by deferring reasonable requests to archive data to enable replication. It was only when you became backed into a corner by The Royal Society that you made the data available. Your delays and roadblocks (such as providing an antique data format of the punched card era), plus refusing to provide metadata says more about your integrity than the data itself. Your actions make it appear that you did not want to release the data at all. Your actions are not consistent with the actions of the vast majority of scientists worldwide when asked for data for replication purposes. Making data available on paper publication for replication is the basis of proper science, which is why The Royal Society called you to task.”

The Yamal Implosion By Bishop Hill

Then there is this typically sneering post by the team at Real Climate blog trying once again to defend one of their team and their hockey stick graph from any criticism.

Hey Ya Mal by Real Climate.

I addition, here is a rebuttle of the Real Climate post: