In amongst the most damning of the Climategate emails was one from CRU head Phil Jones in which he boasts of using "Mike's trick" to “hide the decline” that would have otherwise spoiled his graph showing temperatures soaring ever-upward. This was met with howls of protest from Jones, Mann, Schmidt and all their supporters that this comment was being taken "out of context" and that the term "trick" referred to nothing sneaky. Indeed the term "hiding the decline" wasn't what it appeared either, or was it?

In the Climategate context it referred to the Briffa tree ring reconstruction and how it showed a late 20th Century decline which was considered "very inconvenient" by the remainder of this close climate clique. Steve McIntyre did what the conspirators of Climategate demanded and put these comments into context as can be seen in full here.

Much recent attention has been paid to the email about the “trick” and the effort to “hide the decline”. Climate scientists have complained that this email has been taken “out of context”. In this case, I’m not sure that it’s in their interests that this email be placed in context because the context leads right back to a meeting of IPCC authors in Tanzania, raising serious questions about the role of IPCC itself in “hiding the decline” in the Briffa reconstruction.

Relevant Climategate correspondence in the period (September-October 1999) leading up to the trick email is incomplete, but, in context, is highly revealing. There was a meeting of IPCC lead authors between Sept 1-3, 1999 to consider the “zero-order draft” of the Third Assessment Report. The emails provide clear evidence that IPCC had already decided to include a proxy diagram reconstructing temperature for the past 1000 years and that a version of the proxy diagram was presented at the Tanzania meeting showing the late twentieth century decline. I now have a copy of the proxy diagram presented at this meeting.

The emails show that the late 20th century decline in the Briffa reconstruction was perceived by IPCC as “diluting the message”, that “everyone in the room at IPCC” thought that the Briffa decline was a “problem” and a “potential distraction/detraction”, that this was then the “most important issue” in chapter 2 of the IPCC report and that there was “pressure” on Briffa and other authors to show a “nice tidy story” of “unprecedented warming in a thousand years or more”.

The Climategate Letters contain a flurry of correspondence between Mann, Briffa, Jones and Folland (copy to Tom Karl of NOAA) on Sep 22-23, 1999, shedding light on how the authors responded to the stone in IPCC’s shoe. By this time, it appears that each of the three authors (Jones, Mann and Briffa) had experimented with different approaches to the “problem” of the decline.

Jones appears to have floated the idea of using two different diagrams - one without the inconvenient Briffa reconstruction (presumably in the Summary for Policy-makers) and one with the Briffa reconstruction (presumably in the relevant chapter). Jones said that this might make it “somewhat awkward for the reader trying to put them into context”, with it being unclear whether Jones viewed this as an advantage or disadvantage:

....Thus, when Mann arrived at work on Sep 22, 1999, Mann observed that he had walked into a “hornet’s nest”. (Mann Sep 22, 1999, 0938018124.txt). In an effort to resolve the dispute, Mann said that (subject to the agreement of Chapter Authors Karl and Folland) he would add back Briffa’s reconstruction, but pointed out that this would present a “conundrum”:

....Mann went on to say that the skeptics would have a “field day” if the declining Briffa reconstruction were shown and that he’d “hate to be the one” to give them “fodder”:

...By the following day, matters seem to have settled down, with Briffa apologizing to Mann for his temporary pangs of conscience. On Oct 5, 1999, Osborn (on behalf of Briffa) sent Mann a revised version of the Briffa reconstruction with more “low-frequency” variability (Osborn, Oct 5, 1999, 0939154709.txt), a version that is identical up to 1960, this version is identical to the digital version archived at NCDC for Briffa et al (JGR 2001). (The post-1960 values of this version were not “shown” in the version archived at NCDC; they were deleted.)

As discussed below, this version had an even larger late-20th century decline than the version shown at the Tanzania Lead Authors’ meeting. Nonetheless, the First Order Draft (Oct 27, 1999) sent out a few weeks later contained a new version of the proxy diagram, a version which contains the main elements of the eventual Third Assessment Report proxy diagram . Two weeks later came Jones’ now infamous “trick” email (0942777075.txt).

Mann’s IPCC trick is related to the Jones’ trick, but different. (The Jones trick has been explained in previous CA posts here, here and consists of replacing the tree ring data with temperature data after 1960 – thereby hiding the decline – and then showing the smoothed graph as a proxy reconstruction.) While some elements of the IPCC Trick can be identified with considerable certainty, other elements are still somewhat unclear.

The diagram below shows the IPCC version of the Briffa reconstruction (digitized from the IPCC 2001) compared to actual Briffa data from the Climategate email of October 5, 1999, smoothed using the methodology said to have been used in the caption to the IPCC figure (a 40 year Hamming filter with end-point padding with the mean of the closing 20 years). 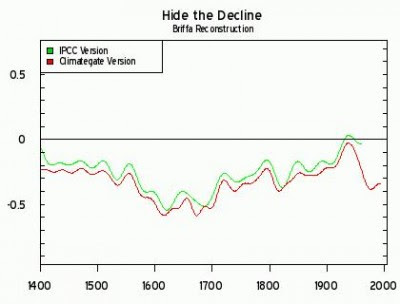 Versions of the Briffa Reconstruction in controversy, comparing the original data smoothed according to the reported methodology to a digitization of the IPCC version.

Clearly, there are a number of important differences between the version sent to Mann and the version that appeared in the IPCC report. The most obvious is, of course, that the decline in the Briffa reconstruction has, for the most part, been deleted from the IPCC proxy diagram. However, there are some other frustrating inconsistencies and puzzles that are all too familiar.

There are some more technical inconsistencies that I’ll record for specialist readers. It is very unlikely that that the IPCC caption is correct in stating that a 40-year Hamming filter was used. Based on comparisons of the MBH reconstruction and Jones reconstruction, as well as the Briffa reconstruction, to versions constructed from raw data, it appears that a Butterworth filter was used – a filter frequently used in Mann’s subsequent work (a detail that, in addition, bears on the authorship of the graphic itself).

Second, the IPCC caption stated that “boundary constraints imposed by padding the series with its mean values during the first and last 25 years.” Again, this doesn’t seem to reconcile with efforts to replicate the IPCC version from raw data. It appears far more likely to me that each of the temperature series has been padded with instrumental temperatures rather than the mean values of the last 25 years.

Finally, there are puzzling changes in scale. The underlying annual data for the Jones and Briffa reconstructions are expressed in deg C (basis 1961-1990) and should scale simply to the smoothed version in the IPCC version, but don’t quite. This may partly derive from errors introduced in digitization, but is a loose end in present replication efforts.

The final IPCC diagram (2.21) is shown below. In this rendering, the Briffa reconstruction is obviously no longer “a problem and a potential distraction/detraction”and does not “dilute the message”. Mann has not given any “fodder” to the skeptics, who obviously did not have a “field day” with the decline.

Contrary to claims by various climate scientists, the IPCC Third Assessment Report did not disclose the deletion of the post-1960 values. Nor did it discuss the “divergence problem”. Yes, there had been previous discussion of the problem in the peer-reviewed literature (Briffa et al 1998) – a point made over and over by Gavin Schmidt and others. But not in the IPCC Third Assessment Report. Nor was the deletion of the declining values reported or disclosed in the IPCC Third Assessment Report. [Dec 11.- IPCC TAR does contain a sly allusion to the problem; it mentions "evidence" that tree ring density variations had "changed in their response in recent decades". Contrary to claims of realclimate commenters, this does not constitute disclosure of the deletion of the post-1960 values in the controversial figure or even of the decline itself.] The hiding of the decline was made particularly artful because the potentially dangling 1960 endpoint of the Briffa reconstruction was hidden under other lines in the spaghetti graph as shown in the following blow-up:

No real surprises then that these people would resort to visual trickery to conceal what they should be showing. In the other parts to this series I intend to show how the CRU has has influence over other countries temperature sets and they too have hidden the decline or indeed just created a rise where none was seen before.
Posted by Climate Observer at 12.1.10