In an article by Dr. Richard Keen of the University of Colorado entitled: Alaska Climate – Station Data vs Adjusted GHCN/IPCC he looks at the the observed trends versus the adjusted data from the CRU for the IPCC and finds a familiar rising and unjustified temperature change in the IPCC's graphs:

I recently completed a study of central Alaska's climate. For this study I computed the average annual temperature for nine long-term Alaskan stations (and station combinations), which are: Eagle/Dawson, Ft. Yukon/Central, Fairbanks University, McKinley Park, Talkeetna, Gulkana/Kennecott/Chitina/McCarthy, Yakutat, Cordova, and Valdez. Then I averaged the nine stations for a regional mean. The data source was NCDC. 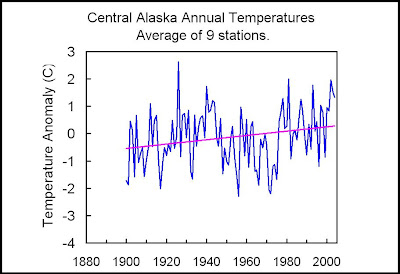 The annual values on the next plot clearly show the dominance of the PDO in Alaskan climate.

For comparison with the IPCC thumbnail for Alaska (I hope you can find an enlarged version of this), I replotted the regional temperatures as ten-year averages. 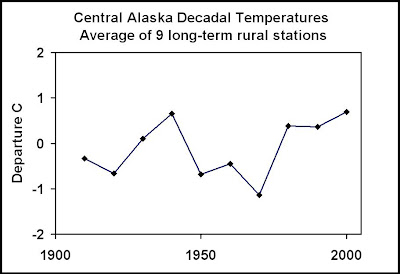 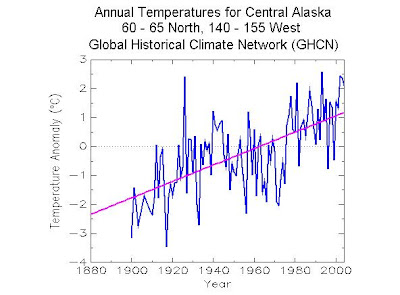 Here is the GHCN annual temperatures for the same region. The GHCN data is dominated by an upward trend. My analysis gives an upward linear trend of 0.69 C/century (due to starting during a cold PDO and ending during a warm PDO), while the GHCN trend is 2.83 C/century - over 2 degrees larger! 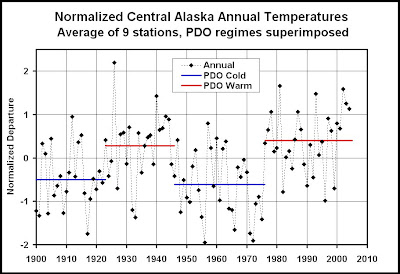 Here is a blow up of the IPCC graph for Alaska. 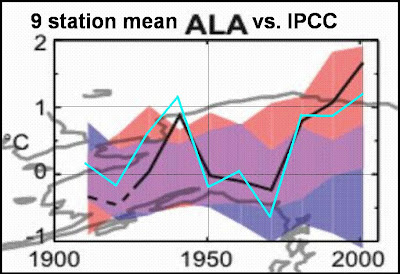 My study and the GHCN use the same stations, because there are no other long-term stations in the regions. I applied no "corrections" beyond offsets used when combining two or more stations with overlapping records (no other adjustments were warranted). One can only guess what "corrections" were applied to the GHCN and IPCC data sets, but I can easily guess their magnitude - about 1 degree. Curiously, the magnitude of the adjustments is about the same as the "global warming" signal of the past century.

Dr. Richard Keen later wrote another article entitled:A Chilly December at the 700mb Level about the decline in recent temperatures in Coal Creek Canyon in Colorado, which is NW of Denver. In it he shows how this is an example of how one station’s data can be significant for assessing climate change, but only if the station is carefully installed and maintained, is in a location relatively free of non-climatic influences, has records that are diligently kept, and, above all, does not have its records mysteriously altered, as opposed to one tree from one location that fits a predetermined outcome becoming the standard for world temperature. 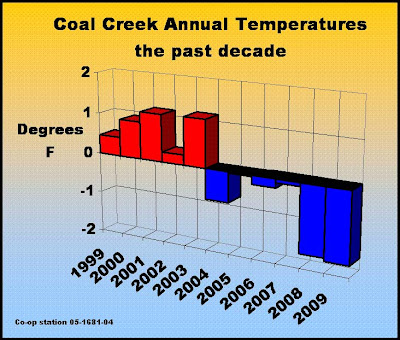 The longer record at my location (CCMONTH_Hide decline anim) shows the Tipping Point more dramatically through the miracle of animation. The added trend line is from a special “best fit Hockey Stick” code I found in some downloaded e-mails last month, although I had to alter the code to change the angle of the blade. 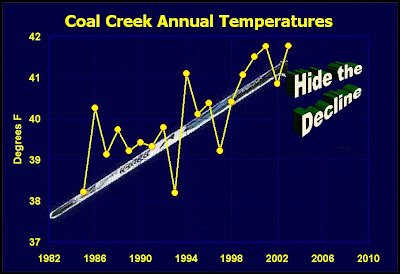 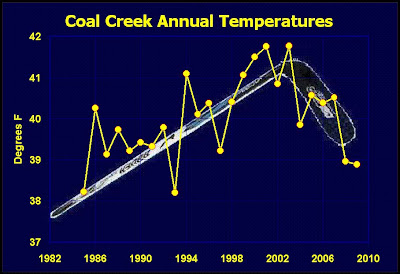 After last January’s post, someone commented on “Watts Up With That?” that (s)he “didn’t really think [Anthony Watts] couldn’t scrape up any less significant data”. I was heartbroken with the thought that my 10,059 daily max and min temperatures could be the least significant atmospheric observations ever made. So allow me to put the record from my particular station in perspective.

The site is about 60 miles from the geographic center of Colorado, and a couple of thousand feet higher than the average elevation of the state. The aerial photo of the site (marked by the red asterisk) looks to the northwest (Coal Creek aerial). Following is a table of correlation between Coal Creek Canyon annual means and measurements of annual temperatures for the entire state of Colorado. 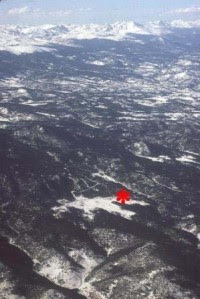 Correlation R between Coal Creek Canyon and:
0.92 NCDC Statewide Divisional average
0.89 GHCN and Hadley gridded temperatures (the two were so similar they were averaged together)
0.91 NCAR-NCEP Reanalysis gridded temperatures
0.95 Average of all three

These correlations are much better than those of any Bristlecones with that other Hockey Stick. Although there’s bristlecones a short hike from my house (picture - bristlecone small), I leave them alone. With a correlation R = 0.95. the Coal Creek station is pretty representative of the entire state of Colorado. Colorado, in turn, is in the Rocky Mountain and intermountain West, a region projected by the IPCC to have the greatest warming in the “lower 48” states - about 4C, or 7F, over this century (see part of IPCC fig-11-8-3). According to the IPCC models, greenhouse gas warming should be greatest over continental interiors and in the middle troposphere, so Coal Creek Canyon is an ideal “global warming” monitoring site. How, then, is the projected 0.7F per decade warming coming along?

This is an example of how one station’s data can be significant for assessing climate change, but only if the station is carefully installed and maintained, is in a location relatively free of non-climatic influences, has records that are diligently kept, and, above all, does not have its records mysteriously altered. It would be instructive to see records from other observers who have quality records of long duration.

What then about Russia? Have they been affected by CRU's influence? In part six we will look at how indeed they have.
Posted by Climate Observer at 12.1.10