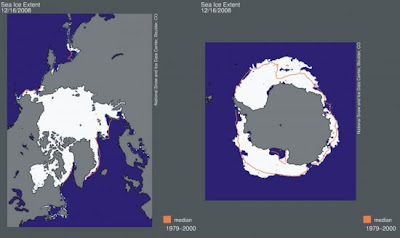 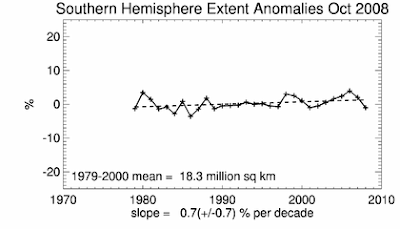 Gore says disturbing changes have been measured under the West Antarctic ice sheet, implicitly because of “global warming.”

Most of the recession in this ice sheet over the past 10,000 years has occurred in the absence of any sea-level or temperature forcing. In most of Antarctica, the ice is in fact growing thicker. Mean Antarctic temperature has actually fallen throughout the past half century. In some Antarctic glens, environmental damage has been caused by temperature decreases of up to 2 degrees Celsius. Antarctic sea-ice spread to a 30-year record extent in late 2007.
*See the figures above

Gore says half a dozen ice shelves each “larger than Rhode Island” have broken up and vanished from the Antarctic Peninsula recently, implicitly because of “global warming.”

Gore does not explain that the ice shelves have melted before, as studies of seabed sediments have shown. The Antarctic Peninsula accounts for about 2% of the continent, in most of which the ice is growing thicker. All the recently-melted shelves, added together, amount to an area less than one-fifty-fifth the size of Texas.

Gore focuses on the Larsen B ice shelf, saying that it completely disappeared in 35 days.

There has been extensive ice-shelf break-up throughout the past 10,000 years, and the maximum ice-shelf extent may have been in the Little Ice Age in the late 15th century. 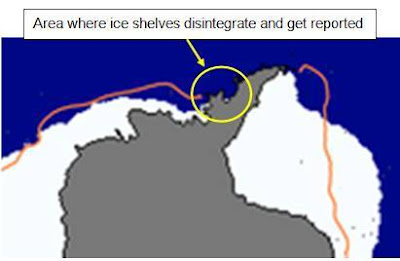 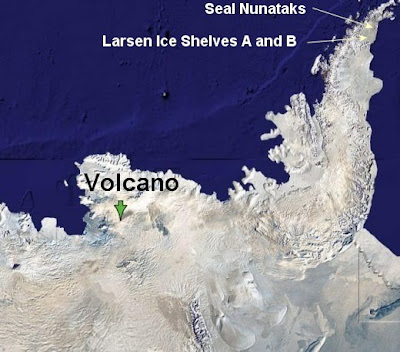 One of the other things that Al Gore forgot to mention about the Antarctic Peninsular is the active volcano(s) in that region that may be an alternate source of any recent shelf destruction. 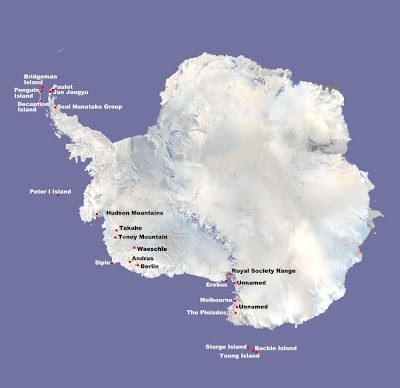 Each of the red dots is a volcano in Antarctica. Note how many are on the peninsula near the Larsen and Wilkins Ice shelf's which are the ones most used to prove a link to global warming and in the western half of Antarctica in general.
Posted by Climate Observer at 31.8.09