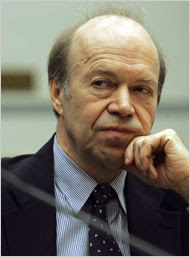 Dr. James Hansen PhD (pictured above) is the head of NASA GISS. He has been involved in the advocacy of global warming for 20 odd years. He is also the chief scientific advisor to Al Gore. He is also a climate change activist and is widely recognised by sceptics as the chief climate change alarmist. So what sort of things has he said over time to be given such a title?

In 1987 and 1988, Hansen testified before Congress about human caused global warming. The ‘87 testimony took place in November and went largely unnoticed. Recognizing that the public tends to doubt global warming when it is cold outside (see section 4), another hearing was scheduled, this time for June. Timothy Wirth (D-Colorado), then chairman of the Senate Energy and Natural Resources Committee selected June 23rd, historically the hottest day of the year in Washington DC. The night before the hearing, committee staffers opened all the windows in the hearing room to make sure the air conditioning wasn’t working properly. Not surprisingly, the hearing was appropriately hot.

The three scenarios that Hansen presented remain embroiled in controversy to this day.

The first of the scenarios was initially presented in 1984, and the others were completed over subsequent years. All three were first published together in a 1988 paper. The scenarios were computed on a 1970s era mainframe with the tiniest fraction of computing power compared to what is common today. Of particular interest is that it used a simplified ocean, excluded anthropogenic aerosols, and its calculated climate sensitivity for doubled CO2 was 4.2 °, versus the current best estimate of 3 °.

In the 1988 testimony Hansen said, “We have considered several scenarios because there are uncertainties in the exact trace gas growth in the past and especially in the future.”

The top line (red) is scenario A, which Hansen described as “business as usual.” It did not include any volcanic eruptions, which act to cool the planet. It also included the effects of additional and poorly measured trace gases. Scenario A’s greenhouse emissions increased 1.5% per year.

Scenario B (green) is the middle graph. It included volcanic eruptions in 1995 and 2015. Of course, we don’t know when volcanoes are going to erupt in the future, but we do know that they will erupt sometime. The greenhouse gas emissions grow linearly. In the 1988 paper, which was attached to his written testimony, scenario B was described as “perhaps the most plausible of the three cases.”

Scenario C (blue) is the bottom graph. It also includes volcanic eruptions in 1995 and 2015. The growth of the greenhouse gas emissions is also linear, although at a slightly lower rate than scenario B. After the year 2000, the growth of these gases flat lines. Hansen described this scenario as “draconian measures.”

So Hansen bracketed expected warming with high and low scenarios.

The testimony was based on outcomes projected by scenario B. 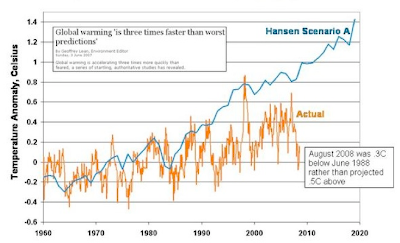 Much of Dr. Hansen's 1988 testimony is detailed in this Link:

So what other sort of quotes has Dr. Hansen given to warrant his status as an alarmist? Below are some samples: (Emphasis is mine)

"heads of major fossil-fuel companies who spread disinformation about global warming should be 'tried for high crimes against humanity and nature."

"They (the sceptics) pay for self-serving studies, and any scientist who disagrees with Gore is obviously on the take.”

“We have reached a point of planetary emergency… climate is nearing dangerous tipping points. Elements of a perfect storm, a global cataclysm, are assembled… the oft-stated goal to keep global warming less than +2 C (+3.6 Fahrenheit) is a recipe for global disaster, not salvation.”

“Global climate is near critical tipping points that could lead to …. progressive, unstoppable global sea level rise, shifting of climatic zones with extermination of many animal and plant species, reduction of freshwater supplies for hundreds of millions of people, and a more intense hydrologic cycle with stronger droughts and forest fires, but also heavier rains and floods, and stronger storms driven by latent heat, including tropical storms, tornados and thunderstorms."

If we continue to build coal-fired power plants without carbon capture, we will lock in future climate disasters associated with passing climate tipping points.

The hardest part is trying to influence the nature of the measurements obtained, so that the key information can be obtained. Link

It seems common for scientists who advocate for Climate change to “alter” or “influence” their data and suddenly they have miraculously warming often appear where none was seen before. It is common for sceptic’s to be referred to as “deniers”, “Holocaust deniers”, like “Big Tobacco lawyers” or “Tobacco scientists”, “friends of”, or “in the pay of Big Oil,” “Nutty fringe dwellers”, who also believe in conspiracy theories about JFK, alien abduction and faking the Moon landings etc.

For some people, belief in global warming is taking on a religious outlook with sceptics being called “heretics”, complete with calls for their banishment or worse. Also the belief the world can only be saved by “sacrifices” to Gaia.

All of these things are designed to trash the credibility of the alleged dissenter.

Richard A. Muller (Author and Physicist and AGW believer) commenting on James Hansen:

He’s a very good climate scientist, but he’s decided to do the politics. I feel that he’s doing some cherry-picking of his own [when it comes to the science]. At that point, he’s not really being a scientist. At that point, you’re being a lawyer. He’s being an effective advocate for his side, but in the process of doing that he’s no longer a neutral party and he’s no longer giving both sides of the issues. 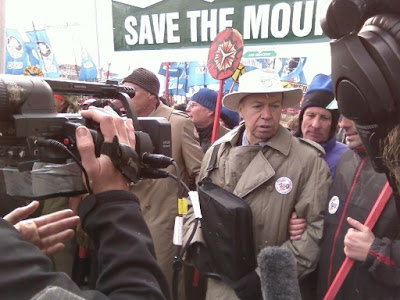 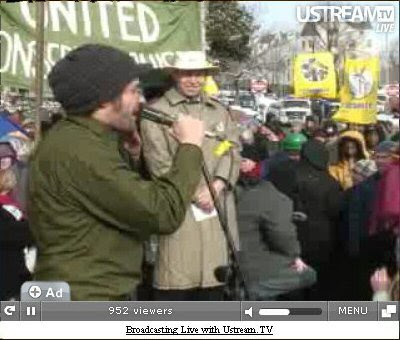 Hansen is a political activist who spreads fear even when NASA’s own data contradict him. [...] NASA should be at the forefront in the collection of scientific evidence and debunking the current hysteria over human-caused, or Anthropogenic Global Warming (AGW).

Unfortunately, it is becoming just another agency caught up in the politics of global warming, or worse, politicized science. Advocacy is replacing objective evaluation of data, while scientific data is being ignored in favour of emotions and politics.

Hansen “embarrassed NASA” with his alarming climate claims and said Hansen was “was never muzzled.”

This was in response to Dr. Hansen's claim that he was being muzzled by President George W. Bush's Administration.

“…Hansen was never muzzled even though he violated NASA’s official agency position on climate forecasting (i.e., we did not know enough to forecast climate change or mankind’s effect on it). Hansen thus embarrassed NASA by coming out with his claims of global warming in 1988 in his testimony before Congress,”

“…climate models are useless.” “My own belief concerning anthropogenic climate change is that the models do not realistically simulate the climate system because there are many very important sub-grid scale processes that the models either replicate poorly or completely omit,”

“Furthermore, some scientists have manipulated the observed data to justify their model results. In doing so, they neither explain what they have modified in the observations, nor explain how they did it. They have resisted making their work transparent so that it can be replicated independently by other scientists. This is clearly contrary to how science should be done. Thus there is no rational justification for using climate model forecasts to determine public policy,”

As we have seen before in this Link Dr. Hansen has been forced to correct temperature data from his NASA GISS organisation. This not the only time this has occurred.

In 2008 NASA GISS's temperature data was again brought into question when they falsely used the same Russian temperature data from September for October so it would show greater warming. This also exposed that NASA GISS's quality control was mostly staffed by part time staff. 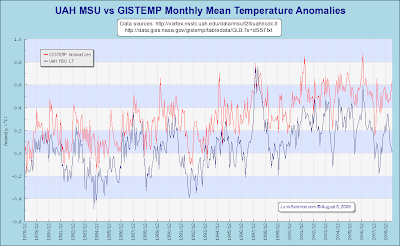 As we have also seen in my earlier post called Global Warming from 1998 the NASA GISS data(red) is increasingly divergent from the satellite data recorded by the Aqua Sattelite used by UAH (blue).

This is phenomenon is discussed in this MENSA article where they say:

The net result is that the GISS dataset consistently shows more warming than other data sets.

The GISS data set shows warming whereas the others do not.

One of the other items dicussed is that Hansen periodically revises the adjustment methods used on his raw data. So he may periodically go back to previous data and "re-adjust" it. It always seems to be in and upwards direction when he does.