Gore says that a sea-level rise of up to 6 m (20 ft) will be caused by melting of either West Antarctica or Greenland. Though Gore does not say that the sea-level rise will occur in the near future, the judge found that, in the context, it was clear that this is what he had meant, since he showed expensive graphical representations of the effect of his imagined 6 m (20 ft) sea-level rise on existing populations, and he quantified the numbers who would be displaced by the sea-level rise. 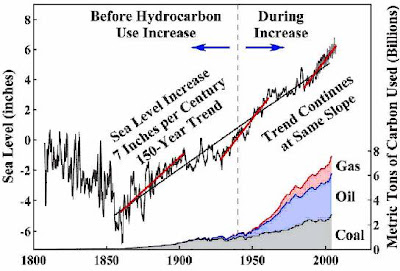 The sea has been rising since near the end of the little Ice age in 1850. It’s rate of rise has been fairly consistent over that entire time (both pre and post man made CO2 rise) as can be seen in the graph above.

The IPCC estimates a sea-level rise of “59 cm” by 2100. This is the IPCC’s upper estimate, on its most extreme scenario. The IPCC has reduced this upper estimate from 3 ft in 2001 to less than 2 ft (i.e. half the mean centennial sea-level rise that has occurred since the end of the last Ice Age 10,000 years ago) in 2007.

The judge was accordingly correct in finding that Gore’s presentation of the imagined imminent threat of a 6 m (20 ft) sea-level rise, with his account of the supposed impact on the present-day populations of Manhattan, the Netherlands, Bangladesh, etc., etc, was not a correct statement of the mainstream science on this question. 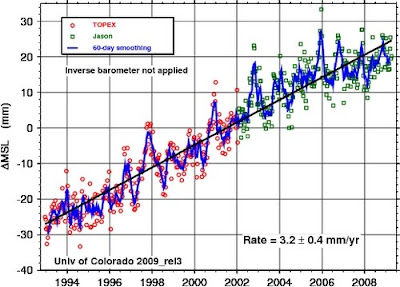 Closer examination of the Topex and Jason satellite recordings from 2009 (above) shows no net rise since 2005. Also whilst the initial rate of rise looks steep on this graph when you put it on the long term historical context(seen below) it is barely a rise at all. 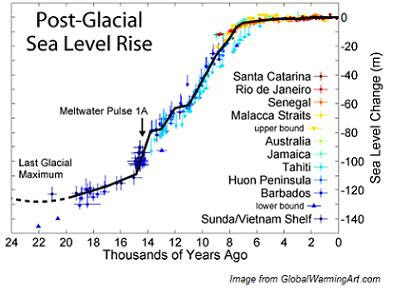 There are several coastlines (the east coast of England, for instance) where the land is sinking as a consequence of post-ice-age isostatic recovery, or where (as in Bangladesh) tectonic subduction is similarly causing the land to sink. But such natural causes owe nothing to sea-level rise. 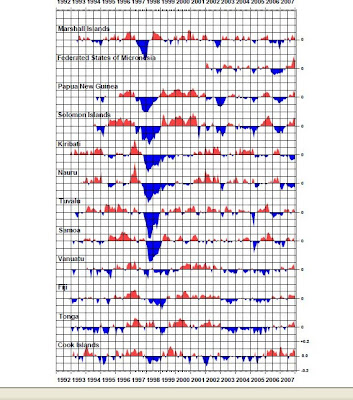 In Tuvalu the tide-gauges (as seen above) maintained until recently by the National Tidal Facility of Australia show a mean annual sea-level rise (of 0.07 mm per year) over the past half-century equivalent to the thickness of a human hair. A graph of sea level changes in all the locations tested by the National Tidal Facility is also seen above. Note the lack of any dramatic rises on any of the locations.

The Carteret Islands flooding arose not because of rising sea levels but because of imprudent dynamiting of the reefs by local fishermen.

In the Maldives, a detailed recent study showed that sea levels were unchanged today compared with 1250 years ago, though they have been higher in much of the intervening period, and have very seldom been lower.

A well-established tree very close to the Maldivian shoreline and only inches above sea level was recently uprooted by Australian environmentalists anxious to destroy this visible proof that sea level cannot have risen very far.

The tree in question is shown above.