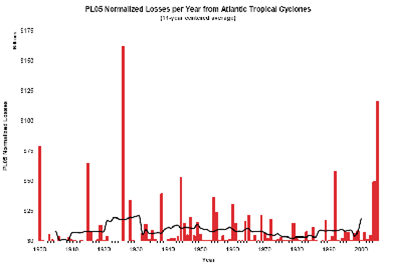 Gore says insurance losses arising from large storms and other extreme-weather events are increasing, by implication because of “global warming.”

Insured losses, as a percentage of the population of coastal areas in the path of hurricanes, were lower even in 2005 than they had been in 1925.

This is backed up by National Oceanic and Atmospheric Administration (NOAA) which stated in Feb 2008:

A team of scientists have found that the economic damages from hurricanes have increased in the U.S. over time due to greater population, infrastructure, and wealth on the U.S. coastlines, and not to any spike in the number or intensity of hurricanes.

“There is nothing in the U.S. hurricane damage record that indicates global warming has caused a significant increase in destruction along our coasts.” 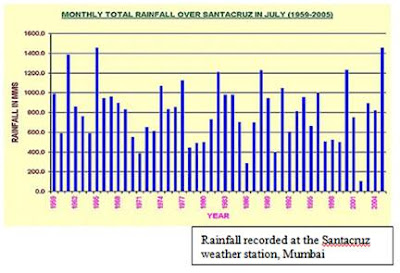 Gore says flooding in Mumbai is increasing, by implication because of “global warming.”

Rainfall trends at the two major weather stations in Mumbai show no increase in heavy rainfall over the past 48 years. (See graph above) 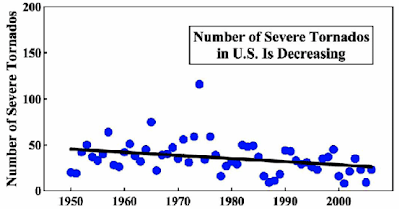 Gore says that 2004 set an all-time record for tornadoes in the US.

More tornadoes are being reported because detection systems are better than they were. But the number of severe tornadoes has been falling for more than 50 years. (Note the black line on the graph, above)

Gore says that ice-melt allows the Sun to heat the Arctic Ocean, and a diagram shows the Sun’s rays heating it directly.

The ocean emits radiant energy at the moment of absorption, and would freeze if there were no atmosphere. It is the atmosphere, not the Sun that warms the ocean. Also, Gore’s diagram confuses the tropopause with the ionosphere, and he makes a number of other errors indicating that he does not understand the elementary physics of radiative transfer.
Posted by Climate Observer at 31.8.09