Global Warming prior to the Little Ice Age 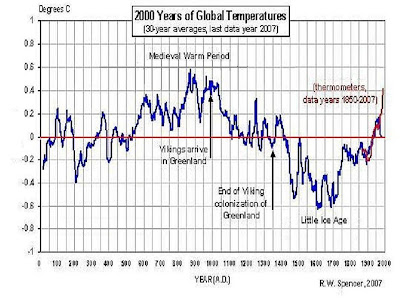 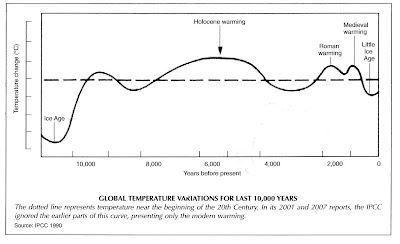 As I said in my introduction on this blog sceptics like myself are of the belief that the climate has always been changing throughout history. Therefore, what we are seeing at the moment in terms of any changes is probably not out of the ordinary and despite the regular assurances from the environmental activists and more alarmist scientists and politicians that this is "unprecedented," it has in all likelihood occured before. Evidence of this is the various warm interglacial periods that have been identified in our human history.
As can be seen from the two graphs above there have been several recorded times of both global warming and global cooling between the last ice age and the little ice age. Variances in temperature is a natural process through which both mankind and sensitive environments such as the North and South Poles, and Great Barrier Reef have survived. The top graph is a recreated temperature record by Dr.Roy Spencer (of UAH) and the bottom one is the one that the IPCC used in it's reports prior to trying to wipe out this evidence with the now discredited Mann's Hockey Stick temperature graph.
As can be seen in both of these graphs the last period of warming prior to the little ice age is a period identified as up to 2 OC warmer than is presently being experienced.
“The peak of the Medieval Warm Period was 2O warmer than today and the little Ice Age 2O colder at its worst. The total range is 4OC. The warming over the 20th century was 0.6 degrees by comparison. This recent warming has melted ice on some high passes in the Swiss Alps, uncovering artefacts from the Medieval Warm Period and the prior Roman Warm Period.” – Dr. David Archibald
“If human emissions, as is claimed, have given us global warming,”, “how can we have cooling as shown by the Hadley Centre since 2003, concurrent with a rise in CO2?
“How can the Medieval Warming, Roman Warming, Minoan Warming and Holocene maximum be explained? There were no CO2 emitting industries yet the global temperature and sea level were higher than now.” - Professor Ian Plimer (PhD, Professor of geology, School of Earth and Environmental Sciences University of Adelaide and Professor Emeritus of Earth Sciences, University of Melbourne)


The Holocene optimum occurred approximately eight thousand years ago, right after the last Ice age. Between then and now there have been two other optimum periods the Roman warming and the Medieval warming.
“The Roman’s grew grapes in York and during the worldwide medieval warm period – when civilizations blossomed across the world –Nordic settlers farmed lowland Greenland (hence its name) and then got wiped out by the Little Ice Age that lasted roughly from the 16th century until about 1850”.– Dr. David Bellamy (Botanist and environmentalist and former BBC science presenter)
The Vikings were on Greenland from approximately 990 to 1350 when they were forced to abandon farming due to the cold.
The sad part is that the more alarmist elements of the scientific community and media (like the U.K. Guardian's green leftist journalist George Monbiot) desperately try to discredit and rubbish such verifiable claims by long distinguished Professors such as David Bellamy as the evidence he and they present casts doubt on the narrative such activists are continuously trying to build.