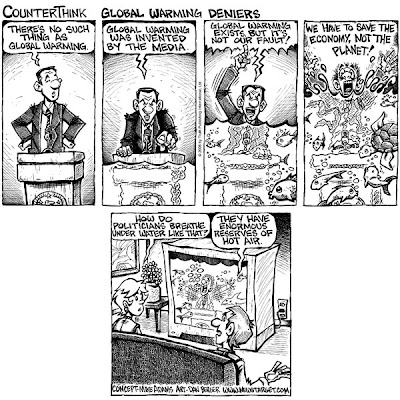 Anyone who dares to challenge the orthodoxy that climate change is as bad as is being reported, and is solely caused by mankind’s greenhouse gas emissions, particularly CO2 are often demonised under this noble cause corruption.

A recent example of this is Senator Steve Fielding in the Australian Senate. Senator Fielding a trained engineer was for a long period a believer in man made climate change. However when presented with some evidence he couldn't reconcile with his understanding he chose to investigate the matter further. After his investigations he posed questions to the Minister for Climate Change Penny Wong and her scientific advisers Dr. Penny Sackett (Australia's Chief Scientist) and Climate scientist Will Steffen. After deeming their response to his questions unsatisfactory to overcome his now growing doubt he declared himself to have become a climate change sceptic. Ever since believers of the Climate Change theory have vilified him, his religion, his new beliefs and anything else they can think of to try an discredit him in the eyes of the public.

They are often labelled “Deniers” or worse and are painted as uncaring about the environment and the future as is depicted in the cartoon to the left. Any scientist associated with the sceptics is labelled as in the pay of “Big Oil” or more recently a “Tobacco Scientist” as seen in: Link

As is often the case, nothing could be further from the truth.

Being a sceptic on climate change does not automatically mean you are “anti-green” or are ignorant or uncaring about environmental issues, such as the need to reduce , reuse, recycle to conserve scarce resources. Or that the world is not indeed polluted by certain activities undertaken by human beings and there is a need to make the world a cleaner place to live for all.
A CO2 Sceptic is more likely someone who believes there is a more logical explanation to the increase in global temperatures that we have experienced in the last few decades.Someone who wishes to keep the debate open to ensure that all causation's are looked at and not just one.

Sceptics prefer to draw attention to other possible explanations as to what has made our climate change and also to voice an educated opinion against the unscientific and unsubstantiated reasoning behind so called "green taxation" which is supposed to stop “Anthropogenic Climate Change". A Tax on pollution is one thing, but a tax on a naturally occurring element from the periodic table is something else. All in the name of reducing climate change. Sceptic are more likely to believe that it is arrogance in the extreme believe that man has control over our climate, they are more likely to favour controlling just the contamination of the food and air we breathe from things like particulate matter.

CO2 Sceptics will also actively promote the proposition that there is no such thing as "Man Made Climate Change", until the World's Governments recognise that Climate Change and Man Made Pollution are two separate issues and not part of the same problem as currently promoted by "Climate Change Journalists" and over zealous Government funded scientists.

Some very notable and eminently qualified scientists have either started out as sceptics in this debate, or have defected as their suspicions of the weakness of the climate change argument are confirmed.More and more are defecting every year, which concerns the believers and alarmists, so they do their best to discredit them.

Sceptics are also concerned about the Billions in funds that Climate Change research and flights of fantasy are draining away from real environmental problems with real workable solutions that cost real money.

Money that is draining away in its tens and soon to be hundreds of Billions by government funded taxes and private business donations, all to stop something that appears to have stopped naturally eleven years ago.

In the mean time the other solvable environmental problems are left to get inexorably worse as their sources of funding dry up, simply because the likes of Al Gore have made Climate Change “trendy” and not something you want to be seen opposing. Also the temptation for politicians is to be immortalised as one of the few who save the planet from mankind's evil gases, whatever the cost.

All the while climate companies (like Al Gore’s), scare big, promise big, deliver little and make lots of profit for their shareholders. Whilst denigrating and belittling anyone who dares challenge their orthodoxy and authority.
Posted by Climate Observer at 18.8.09