Following on from my last post is this one on Professor Tim Flannery (PhD, Professor in palaeontology and mammalogy, climate activist, Author of the book “The Weather Makers”) (Pictured above) :

Professor Flannery is probably the best known Australian activist on climate change having been awarded the title of Australian of the Year in 2007. Professor Flannery's main tactic appears to be to give public or private talks on climate change (which have earned him considerable sums of money in the process) where he often talks in terms of possible scary and alarmist consequences rather than specifics of hows, whys where's, etc. Examples of this can be seen from the quotes below: (Any emphasis is mine).

“Picture an eight-storey building by a beach, then imagine waves lapping its roof.”

The worst predictions of sea level rises by the IPCC are 59 cm by 2100. According to the University of Colorado sea level website which uses information gathered by the Topex and Jason 1 and Jason2 satellites, there has bee no rise in sea levels for approximately four years. In fact there may have even been a slight fall.

Not according to the recorded data from NOAA. 2009 has seen one of the latest starts to the Atlantic Hurricane season ever.

“Polar bears are going to go with the ice cap. They’re not going to actually last that long.”

Not according to Evolutionary Biologist and Palaeozoologist Dr. Susan Crockford (of the University of Victoria in Canada has published a number of papers in peer-reviewed academic journals.) Or the U.S. Fish & Wildlife Service. Or Canadian biologist Dr. Mitchell Taylor, (the director of wildlife research with the Arctic government of Nunavut). Or Award-winning quaternary geologist Dr. Olafur Ingolfsson, (a professor from the University of Iceland, has conducted extensive expeditions and field research in both the Arctic and Antarctic).

“For the past 10,000 years, Earth’s thermostat has been set to an average surface temperature of about 14 degrees Celsius.”

Not according to this earlier post or this one. Of course the alarmists want us to all believe that the temperature has never changed for thousands of years, until mankind increased his CO2 emissions. Otherwise too many people start to question their theory. This sort of thinking was what led to the Hockey Stick Graph being accepted as fact until it's debunking and removal.

Melbourne’s also vulnerable to water deficits. It’s a large city, it’s in an area of quite dramatic climate change, and therefore will be vulnerable as well.

He neglects to mention that the Victorian State Labor Government overturned a decision by their predecessor to build a Dam on the Mitchell River system that would have secured Melbourne's growing population a water supply for decades. A river system that flooded three times in two years in 2007 and 2008. Instead after 10 years of no action, they are building a desalination plant that will deliver a third of the water for six times the cost of the dam.

… ”I think there is a fair chance Perth will be the 21st century’s first ghost metropolis,” Article link 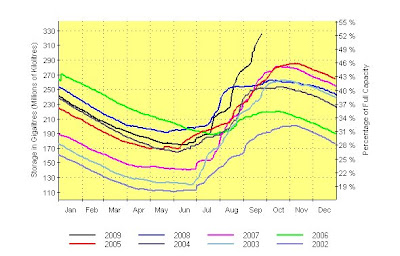 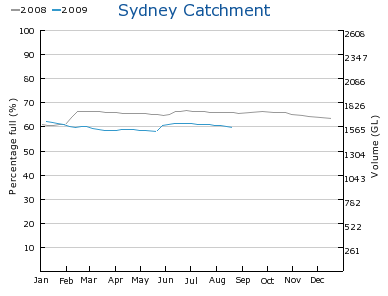 Environmental researcher Tim Flannery has warned that Brisbane and Adelaide - home to a combined total of three million people - could run out of water by year’s end.

Brisbane's dams are at 78% after one of their wettest Autumns and starts to winter in decades. 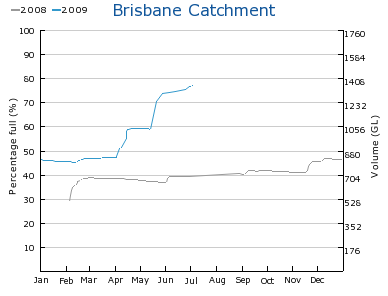 Adelaide's Dams are at 90% and rising, without pumping water from the Murray River. 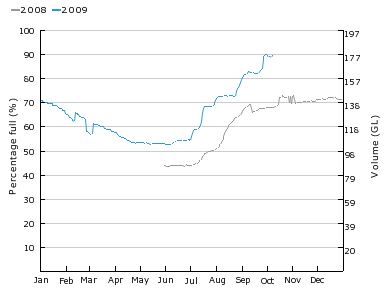 Then there was this article on the 23rd September 2009 which stated:

Two of the reservoirs serving the Adelaide metropolitan area are full, after good spring rains this week.

....The Hope Valley and Warren reservoirs are both full, while the Barossa, Mount Bold and Millbrook storage levels are all above 90 per cent.

The following is some alarmist quotes and the facts that challenge those opinions taken from the article Honouring Tim Flummery by Herald Sun columnist Andrew Bolt:

Examining this set of claims:

Most powerful El Nino ever? Henry Diaz, research meteorologist at the US National Oceanic and Atmospheric Administration (NOAA), says the 1997-98 El Nino was big, but one in 1877-78 was “equal to this one”, causing a famine in India that killed eight million.

Katrina the “most devastating’” hurricane? The US National Climatic Data Centre says “other storms have had stronger sustained winds when they made landfall’’, including one in 1935. It adds: “The most deadly hurricane to strike the US made landfall in Galveston, Texas, on September 8, 1900 . . . claiming more than 8000 lives.” A century ago.

Hurricanes may in fact be weaker. Says the World Meteorological Organisation: “Reliable data from the North Atlantic since the 1940s indicate that the peak strength of the strongest hurricanes has not changed, and the mean maximum intensity of all hurricanes has decreased.”

Hottest European summer? Warns a study in Nature, “almost any such weather event might have occurred by chance”.

First recorded hurricane in the South Atlantic? Yes, but according to records going back just 50 years.

The gas sulphur could be inserted into the earth's stratosphere to keep out the sun's rays and slow global warming, a process called global dimming.

"It would change the colour of the sky,"

"We need to be ready to start doing it in perhaps five years time if we fail to achieve what we're trying to achieve." “As the last barrier to climate collapse.”

He conceded there were risks to global dimming using sulphur.

"The consequences of doing that are unknown."

Massive amounts of acid rain perhaps, Dr. Flannery? I thought he was trying to save the planet? But his alarmism doesn't stop there:

“Regardless of what happened to emissions in the future, there was already far too much greenhouse gas in the atmosphere.”

“Cutting emissions was not enough. Mankind now had to take greenhouse gases out of the air.”

Again a solution with no thought as to the true cost of what he is suggesting.

So-called "geoengineering" solutions that would remove CO2 from the air have been proposed by others, but the group is skeptical; they estimate that artificially removing 50ppm of CO2 from the atmosphere would cost at least $20 trillion, or twice the U.S. national debt of 2008.

Professor Flannery leaves no stone unturned in making sure his message is heard:

The Barrier Reef will become "functionally extinct" within decades at the current rate of global warming...

"The current burden of greenhouse gas in the atmosphere is in fact more than sufficient to cause catastrophic climate change,"

"Everything's going in the wrong direction at the moment, timelines are getting shorter, the amount of pollution in the atmosphere is growing.

It is no longer socially acceptable for Australia to keep exporting coal knowing the damage it is doing.

There is very little gain in going with the herd if that results in a treaty that costs us the Great Barrier Reef and costs us most of our biodiversity in the Kakadu wetlands and so forth.

"Resistance is a suicidal tactic"

"These negotiations are not going as smoothly as we would hope"

Climate Talks Failure Could Be Prelude to War If climate talks between more than 100 Heads of State at the U.N. General Assembly in New York fail, it could have devastating consequences.

The good Professor literally can't open his mouth on this subject without submitting the listener to another series of unsubstantiated scares. Of Note, however, all this alarmism is good for sales and the lecture tours that support them as: The Weather Makers was recently No. 1 on the Canadian book charts. Given his proven lack of accuracy in his wild alarmist predictions maybe he should stick to staring at dinosaur bones.