Gore says “global warming” has been melting the snows of Mount Kilimanjaro in Africa.

The Facts:
The melting of the Furtwangler Glacier at the summit of the mountain began 125 years ago. More of the glacier had melted before Hemingway wrote The Snows of Kilimanjaro in 1936 than afterward.

…Temperature at the summit never rises above freezing and is at an average of –7 Celsius. The cause of the melting is long-term climate shifts exacerbated by imprudent regional deforestation, and has nothing to do with “global warming.” . 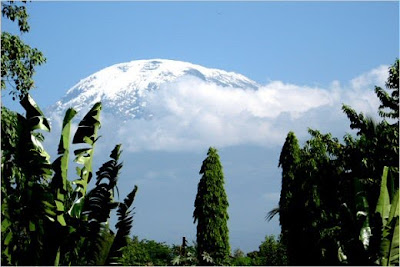 ERROR 6 Lake Chad "drying up"
Gore says “global warming” dried up Lake Chad in Africa.
The Facts:
Over-extraction of water and changing agricultural patterns dried the lake, which was also dry in 8500BC, 5500BC, 1000BC and 100BC.
This is supported by: Lake Chad is so shallow it nearly dried out as far back as 1908, and again in 1984. So many more people depend on it now that the water pumped out for irrigation has quadrupled in 25 years. 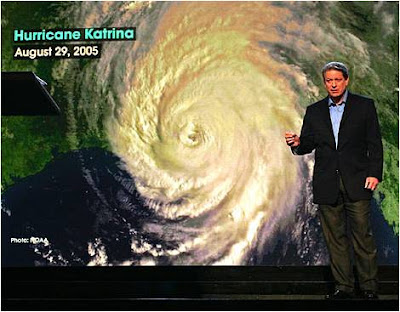 Error 7 Hurricane Katrina "man made"
Gore says Hurricane Katrina, that devastated New Orleans in 2005, was caused by “global warming.”
The Facts:
The subsequent destruction was caused by the failure of ..the administration of New Orleans, to heed 30 years of warnings by the Corps of Engineers that the levees – dams that kept New Orleans dry – could not stand a direct hit by a hurricane. Katrina was only Category 3 when it struck the levees. They failed, as the Engineers had said they would. Poor maintenance of the infrastructure, not “global warming,” Was to blame for the consequent death and destruction.
So when Al Gore said: "Although we cannot attribute any particular storm to global warming....." we can only assume by standing in front of a large picture of Hurricane Katrina and declaring that it was caused by global warming, was him not attributing any particular storm to global warming???
Posted by Climate Observer at 31.8.09