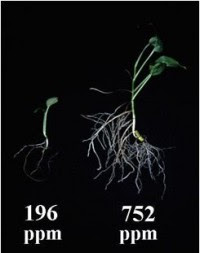 ERROR 30 Carbon dioxide is "pollution"
Gore describes carbon dioxide as “global warming pollution.”
The Facts:
Tests have shown that even at concentrations 30 times those of the present day even the most delicate plants flourish. Well-managed forests, such as those of the United States, are growing at record rates because the extra carbon dioxide in the atmosphere is feeding the trees. Carbon dioxide, in geological timescale, is at a very low concentration at present. Half a billion years ago it was at 7000 parts per million by volume, about 18 times today’s concentration.
See more in this article: CO2 is Green and Green is Good
ERROR 31 The European heat wave of 2003 "killed 35,000"
Gore says, “A couple of years ago in Europe they had that heat wave that killed 35,000.”
The Facts:
Though some scientists agree with Gore, the scientific consensus is that extreme warm anomalies more unusual than the 2003 heat wave occur regularly; extreme cold anomalies also occur regularly; El Niño and volcanism appear to be of much greater importance than any general warming trend; and there is little evidence that regional heat or cold waves are significantly increasing or decreasing with time. In general, warm is better than cold, which is why the largest number of life-forms are in the tropics and the least number are at the poles. A cold snap in the winter following the European heat wave killed 20,000 in the UK alone. Though the IPCC says 150,000 people a year are being killed worldwide by “global warming,” it reaches this figure only by deliberately excluding the number of people who are not being killed because there is less cold weather. In the US alone, it has been estimated that 174,000 fewer people are being killed each year because there are fewer episodes of extreme cold.
ERROR 32 Pied flycatchers "cannot feed their young"
Gore says “The peak arrival date for migratory birds 25 years ago was April 25. Their chicks hatched on June 3, just at the time when the caterpillars were coming out: Nature’s plan. But 20 years of warming later the caterpillars peaked two weeks earlier. The chicks tried to catch up with it, but they couldn’t. So they are in trouble.”
The Facts:
Adaptation is easy for the flycatchers: they merely fly a few tens of kilometres further north and they will find caterpillars hatching at the appropriate time. Besides, though Gore does not say so, what is bad news for the pied flycatchers is good news for the caterpillars, and for the butterflies they will become.
Posted by Climate Observer at 1.9.09