Temperature And The Natural Cycles

So far we have discovered a link between the Southern Oscillation Index and the Winter – Spring rainfall. Are there any other connections between natural cycles and the rise or fall in global temperature?

You have probably heard of the El Nino and La Nina weather cycles in the Pacific Ocean.

El Nino is when predominantly warm waters occupy the central Pacific and push these warmer waters towards Australia and away from South America. This results in higher temperatures and lowered rainfall in Australia and potential drought. It can also effect the weather patterns as far away as Europe. 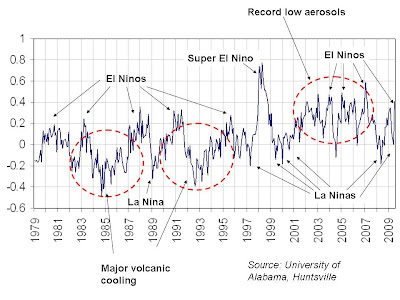 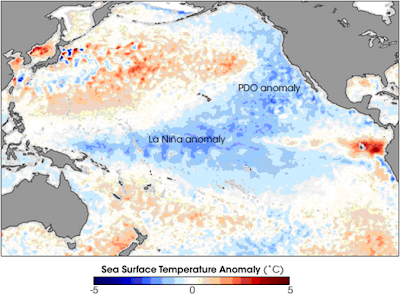 More recently (2007 and 2008) there was a La Nina system (as seen above) that developed and globally there was a significant fall in temperatures, and the rain fall has returned to the more tropical northern parts of Australia.

In addition to the cycles of El Nino and La Nina is another cyclic activity called the Pacific Decadal Oscillation or PDO. Unlike El Nino or La Nina that may occur every 3 to seven years and last from 6 to 18 months, the PDO can remain in the same phase(warm or cool) for 20 to 30 years.

The poster below is from the long paddock website and is a record of rainfall from1890 to 2004. A larger version can be found here the supplementary version from 2004 onwards can be found here.

Notice the correlation of the PDO and ENSO cycles to the drought and flood cycles in Australia. Interestingly, the high rainfall period between 1945 and 1975 is considered the norm and the point of comparison for today. Yet there are clearly more drought cycles than there are flood.