Yet another favourite of the alarmists, politicians and media is to hype all sorts about Hurricanes and Cyclones. Some of the examples we have seen over time have included:

“people should expect more Category 4 and 5 hurricanes if the ocean waters continue to warm.” - Al Gore

“scientists had been giving warnings that hurricanes will get stronger because of “global warming.” - Al Gore

“storms are growing stronger with each passing hurricane season” (implying that this is due to CO2 increases). - President-Elect Barack Obama Nov 2008

"storms that are growing stronger with each passing hurricane season." (as above) – California Governor Arnold Schwarzenegger.

Yet the data from NOAA disputes both of these assertions of increased frequency and strength. As can be seen from the figure above there has been no increase in frequency of Hurricanes in general, or in the number of category 3-5 hurricanes. The data does not lie (unlike many politicians). 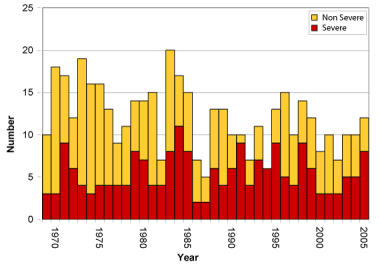 The figure above is for Australian cyclones and it also shows no increase in frequency or severity.

In a paper written in December 2008, called: Are Rising CO2 Levels And The Increase In Atlantic Major Hurricanes Since 1995 Related? - By Dr. William Gray (Professor Emeritus, Dept. of Atmospheric Science, Colorado State University and Head of the Tropical Meteorology Project). In it he says:

I and a number of my colleagues believe that this large increase in Atlantic major hurricanes is primarily due to the multi-decadal increase in the Atlantic Ocean Thermohaline Circulation (THC) that is driven by Atlantic salinity variations. These Atlantic multi-decadal changes have also been termed the Atlantic Multidecadal Oscillation (AMO). These increases are not a result of global surface temperatures or CO2 increases.

Although global surface temperatures have increased over the last century and over the last 30 years, there are now many observational studies which indicate there has not been any significant long term increase in hurricane frequency or intensity in any of the globe’s tropical cyclone basins. 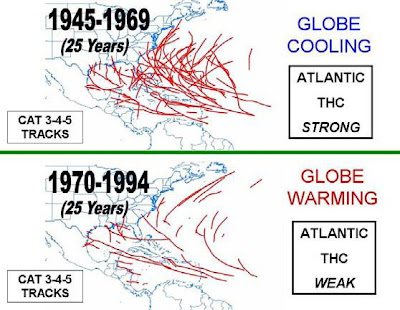 Technology developments have rendered long period over ocean hurricane observations unreliable. The most reliable long-period hurricane records we have are the measurements of US land falling tropical cyclones since 1900 (as in the Table above). Although global mean ocean and Atlantic sea surface temperatures have increased by about 0.4oC between the two 50-year periods of 1900-1949 and 1959-2008, the frequency of US landfall numbers actually shows a slight downward trend for the later period even though CO2 has gone up about 30 percent between these two periods. 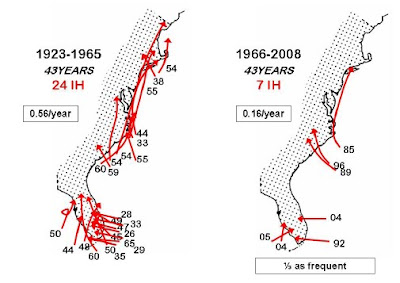 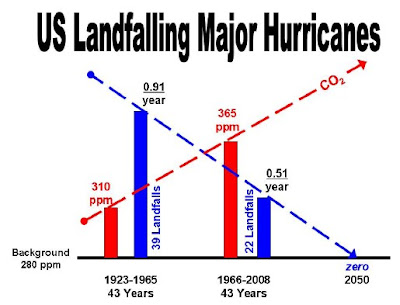 This downward landfall numbers occurred despite the fact that CO2 amounts were approximately 20 percent higher during the latter period compared with the earlier period (as seen in the Figure above). This figure illustrates that caution must be used when extrapolating trends into the future. Obviously, U.S. major hurricane landfalls will continue after 2050.

The active hurricane season in 2008 lends further support to the belief that the Atlantic basin remains in an active hurricane cycle associated with a strong thermohaline circulation and an active phase of the Atlantic Multidecadal Oscillation (AMO). This active cycle is expected to continue for another decade or two at which time we should enter a quieter Atlantic major hurricane period like we experienced during the quarter-century periods of 1970-1994 and 1901-1925. Atlantic hurricanes (particularly major hurricanes) go through multi-decadal cycles. Cycles in Atlantic major hurricanes have been observationally traced back to the mid-19th century, and changes in the AMO have been inferred from Greenland paleo ice-core temperature measurements going back thousand of years.

The influence of rises in atmospheric CO2 on hurricane activities is likely to be very small and within the noise level of our measurement capability or of any reliable numerical model output. There is no way of telling whether CO2 rises might have a miniscule positive or a miniscule negative effect on hurricane frequency or intensity. It would be unwise for our society to reduce atmospheric CO2 gases under the naïve belief that we would in any way be reducing the damage from these storms.

So, where are all of the news stories about the fact we’ve had no tropical storms yet this year? As can be seen in the following graphic, as of this date in 2005 we already had 8 named storms in the Atlantic basin. And tomorrow, August 4, that number will increase to 9. In 2005 we were even told to expect more active hurricane seasons from now on because of global warming.

Of course, even though it is interesting that the 2009 tropical season is off to such a slow start, it may well have no significance in terms of long-term trends.

Of course this declining recent trend in Hurricane activity has led Dr. Michael Mann of Hockey Stick Graph, and Antarctic warming infamy to create another hockey stick graph for hurricanes: As discussed in this article: Mann hockey-sticks hurricanes: Hurricanes in the Atlantic are more frequent than at any time in the last 1,000 years.

But he is not alone. The use of an image of Hurricane Katrina on the cover of “An Inconvenient Truth” left many with the impression that this was the largest hurricane ever recorded. You may recall this statement from Dr. Tim Flannery:

But earlier we proved this statement to be flawed,when:

The US National Climatic Data Centre says “other storms have had stronger sustained winds when they made landfall’’, including one in 1935. It adds: “The most deadly hurricane to strike the US made landfall in Galveston, Texas, on September 8, 1900 . . . claiming more than 8000 lives.” Only a century ago.

So what is the largest and most destructive hurricanes and cyclones ever recorded and when did they occur?

Examining the list of years we find that only five are in the era where CO2 levels are rising due to industrialisation and of those only two are post 1976 where the temperature starts to rise towards it’s peak in 1998. Whilst it could be claimed that the death tolls prior to 1900 may be speculative and therefore so is the list, the fact remains that once again the data it shows, simply doesn’t fit the hype.
Posted by Climate Observer at 13.9.09