Drought And The Murray Darling Basin

Another one of the regional specific scares that is raised is that the recent drought experienced by Australia and the current state of the Murray Darling Basin are as a result of Climate Change. People like Climate Change Minister Penny Wong and alarmist elements of the media are continually trying to insinuate this connection into the public’s mind. Whilst it true that parts of the Murray Darling Basin are under great stress (ie: the lower lakes in South Australia) is this caused by naturally occurring drought and over 100 years of state based mismanagement of the water resource or to CO2 induced climate change?

PENNY WONG: There is a great deal of scientific advice about the impact of climate change on rainfall, particularly in southern Australia.

…So there is a very, very sound body of evidence that indicates that climate change is and will have an impact on rainfall in the Murray-Darling Basin and in southern Australia.

Of course she would say that wouldn't she? After all she is trying to sell the idea of a new tax called a Carbon Polution Reduction Scheme to a warey public. What better way than to simply declare that the science is on your side. But is that really the case, or is Penny just being a sneeky and clever politician?

As can be seen from the graph above from the Australian Bureau of Meteorology that the average levels of rainfall as both an average and more specifically in the Murray Darling Basin are not falling significantly away and appear more as a natural cycle.

This is supported by Dr. John McLean in his article Rainfall in the Murray-Darling Basin which states:

Rainfall during winter and spring can be linked to the state of the Southern Oscillation. 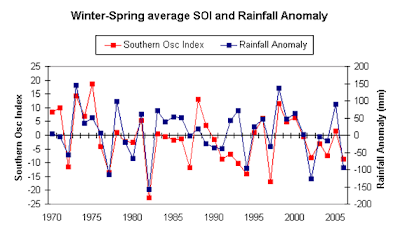 …A graph of these two values (seen above) shows very few periods where one factor moves one way and the other factor moves in the opposite direction.

How abnormal is the recent reduction in rainfall ? Not much, and it's easy to see a likely cause.

It is also supported by William Kininmonth who said in his article: Illusions of Climate Science:

Australia’s documented history, incorporating its cultural and economic development within the constraints of its relatively harsh climate, is relatively short. Drought and other vicissitudes of climate have been ever-present dangers and have been dominant in shaping the pattern of settlement and development. The twentieth century opened with much of the country in the grip of the “Federation Drought” that commenced in the middle 1890's and continued in parts until about 1905.
The decade around the First World War, the late 1930s and through to the early 1940s, and the middle 1960s were all prolonged periods of generally low rainfall, especially in parts of eastern Australia. Although there were short but intense drought periods, such as 1982–83, the second half of the century was generally wetter than the first, until the early 1990's and the beginning of the current dry period.

There is currently a focus on the state of the Murray-Darling Basin and the condition of the lower Murray River, as if the current low river flows had not happened before. However, during the Federation Drought the basin suffered significant rainfall deficiency and by late 1902 the Darling and Murray Rivers had virtually run dry. In 1914 the Murray downstream of Swan Hill was reduced to a series of stagnant pools. Prolonged low rainfall during the 1940's again resulted in stress on the rivers of the Basin and the Murray River ceased to flow at Echuca in April 1945.

There are other factors that have also lead this time to the stresses that the Murray Darling Basin is feeling this time that are manmade but not related to climate change, as was suggested by former Federal Opposition leader Dr. Brendan Nelson :

“What’s happening at the moment in the Murray-Darling Basin is a consequence of two things: mismanagement of the entire system for almost 100 years and also the worst drought in 100 years. "

Mismanagement by a series of State Governments from Queensland, New South Wales, Victoria and South Australia, issuing water licenses and allocations beyond the scope of the river during it’s drier times combined with a downturn in rainfall have caused the current problems in the system rather than climate change.

“You need to get with the science on this,” . “Look at the technical report put together by the CSIRO and the Bureau of Meteorology.”

Of course he is also trying to sell his CPRS to the public and therefore will not have dissenting views being considered. So once again he demand's that the science is supportive of his position, but is it really?

Dr David Stockwell, who checked the report’s modelling and assumptions, on which it relied to predict worse droughts thanks to global warming: found the CSIRO’s models could not even predict the past (wetter) weather: 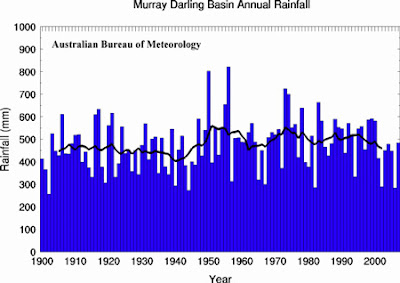 This is also supported by Dr. Tangney Jensen who stated:

Much discussion of the Murray-Darling Basin relates to inflows. This is fair enough in terms of examining what is important, which is water in the system, but allows blame to be attributed to climate change. This is baloney, as can be seen by the Bureau of Meteorology rainfall charts, where it can clearly be seen that rainfall in the Murray-Darling Basin is normal. The
reasons for reduced run-off are more plantations in the top of the catchments; catchment -wide drainage management plans put in place in the 1980's and 1990's to lower water tables and more efficient water use resulting in less leakage…

So much for the science being settled; we now have bad policy based on bad science… At present, green ideology is inhibiting the correct definition of the problem, and the Murray-Darling will continue to suffer as a result.

So the modelling and assumptions based on bad science on which the Prime Minister and his ministers are basing their policies on are far from accurate it would seem.

In February of 2009 an article called Indian Ocean Causes Big Dry: Drought Mystery Solved, was published. In it it states:

The causes of south-eastern Australia's longest, most severe and damaging droughts have been discovered, with the surprise finding that they originate far away in the Indian Ocean.

A team of Australian scientists has detailed for the first time how a phenomenon known as the Indian Ocean Dipole (IOD) - a variable and irregular cycle of warming and cooling of ocean water - dictates whether moisture- bearing winds are carried across the southern half of Australia.

The landmark new study explains the current record-breaking drought in south-eastern Australia and solves the mystery of why a string of La Nina events in the Pacific Ocean - which usually bring rain - has failed to break it. 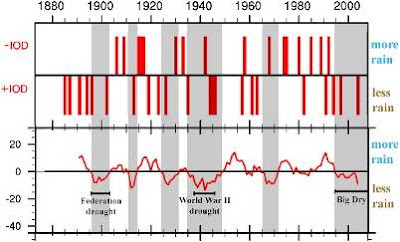 It also reveals the causes of other iconic extreme droughts in recorded history, notably the World War II Drought from 1937 to 1945 and the Federation Drought from 1895 to 1902, and challenges the accepted understanding of the key drivers of Australia's climate.

When the IOD is in its negative phase, a pattern occurs with cool Indian Ocean water west of Australia and warm Timor Sea water to the north. This generates winds that pick up moisture from the ocean and then sweep down towards southern Australia to deliver wet conditions. In its positive phase, the pattern of ocean temperatures is reversed, weakening the winds and reducing the amount of moisture picked up and transported across Australia. So the south-east misses out on its usual quota of rain.

The study notes that the IOD has been in its positive or neutral phase since 1992, the longest period of its kind since records began in the late 19th Century.

The irony of this study was that it was headed by none other than Professor Matthew England. Of course, probably realising that this report suddenly put his funding under threat he later put out a statement to the effect that the current positive phase of the IOD was caused by Climate Change but all the rest were of course naturally occuring. How convenient for him.