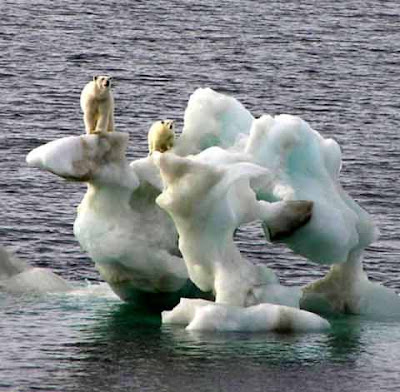 Probably the next most commonly used image after sheets of ice falling off of Ice bergs or glaciers is precariously perched Polar Bears on ever diminishing ice floes. Nothing says “global warming and invokes an emotional response more than a poor suffering innocent animal, and it is used for maximum effect almost daily. The above photo was fitted with the following breathless captions:

They cling precariously to the top of what is left of the ice floe, their fragile grip the perfect symbol of the tragedy of global warming.

Correction: March 3, 2007 A front-page picture caption on Feb. 3 about polar bears floating on chunks of glacial ice, illustrating an article on a global warming report, carried incorrect information from the Canadian Ice Service about when and where the photograph was taken, and about who took it. The picture was taken in August 2006 in the Chukchi Sea, not in 2004 in the Bering Sea, farther south. The photographer was Amanda Byrd, not Dan Crosbie.

But does the reality match the hype?

Well for a start the photo doesn't. As the photographer Australian Amanda Byrd says she took the picture around three years ago (2004) - in the summer. The photograph was not ‘taken by environmentalists’ but as part of a field trip with the university.

...‘the image you have seen around the world was distributed without my consent, and [with] the wrong byline’.

..I simply took the photos...If I released the image myself, it would have been as a striking image. Nothing more.

Of course who was on of the people to misrepresent the photo? None other than Al Gore:

He used it in a presentation on man made global warming.

"Their habitat is melting... beautiful animals, literally being forced off the planet," Mr. Gore said, with the photo on the screen behind him. "They're in trouble, got nowhere else to go." Audience members let out gasps of sympathy…

According to the “US Senate Committee on Environment and Public Works”: Minority Page, the hype does most certainly not match the reality:

The U.S. Fish & Wildlife Service estimates that the polar bear population is currently at 20,000 to 25,000 bears, up from as low as 5,000-10,000 bears in the 1950's and 1960's. A 2002 U.S. Geological Survey of wildlife in the Arctic Refuge Coastal Plain noted that the polar bear populations “may now be near historic highs.” The alarm about the future of polar bear decline is based on speculative computer model predictions many decades in the future. And the methodology of these computer models is being challenged by many scientists and forecasting experts.

Canadian biologist Dr. Mitchell Taylor, (the director of wildlife research with the Arctic government of Nunavut):

“Of the 13 populations of polar bears in Canada, 11 are stable or increasing in number. They are not going extinct, or even appear to be affected at present,” Taylor said. “It is just silly to predict the demise of polar bears in 25 years based on media-assisted hysteria.”

Evolutionary Biologist and Palaeozoologist Dr. Susan Crockford (of University of Victoria in Canada has published a number of papers in peer-reviewed academic journals.)

“Polar bears, for example, survived several episodes of much warmer climate over the last 10,000 years than exists today,”

…“There is no evidence to suggest that the polar bear or its food supply is in danger of disappearing entirely with increased Arctic warming, regardless of the dire fairy-tale scenarios predicted by computer models.”

Award-winning quaternary geologist Dr. Olafur Ingolfsson, (a professor from the University of Iceland, has conducted extensive expeditions and field research in both the Arctic and Antarctic).

“We have this specimen that confirms the polar bear was a morphologically distinct species at least 100,000 years ago, and this basically means that the polar bear has already survived one interglacial period.”

… “This is telling us that despite the on-going warming in the Arctic today, maybe we don't have to be quite so worried about the polar bear.”
In September 2007, it was announced that a soon to be released survey finds Polar Bear population rising in warmer part of the Arctic. Excerpt:

Fears that two-thirds of the world’s polar bears will die off in the next 50 years are overblown, says [Arctic biologist] Mitchell Taylor, the Government of Nunavut’s director of wildlife research. “I think it’s naïve and presumptuous,” Taylor said. […] The Government of Nunavut is conducting a study of the [southern less ice region of the] Davis Strait bear population. Results of the study won’t be released until 2008, but Taylor says it appears there are some 3,000 bears in an area - a big jump from the current estimate of about 850 bears. “That’s not theory. That’s not based on a model. That’s observation of reality,” he says. And despite the fact that some of the most dramatic changes to sea ice are seen in seasonal ice areas such as Davis Strait, seven or eight of the bears measured and weighed for the study this summer are among the biggest on record, Taylor said. “Davis Strait is crawling with polar bears. It’s not safe to camp there. They’re fat. The mothers have cubs. The cubs are in good shape,” Taylor said, according to a September 14, 2007 article.

So again we find the reality not matching the media hype. We also find the same alarmist protagonists misusing images to invoke an emotional response in the audience. The “facts” were obviously too “inconvenient” to be reported accurately as they don’t “prove” that climate change and global warming exist so they are hidden from view.

Even the alarmist WWF admits that the vast majority of Polar Bears are fine with this chart:

Given that there is so much concern from the alarmists about the plight of the Polar Bear you would expect them to seek the advice of the one of the worlds foremost experts on Polar Bears at the Climate Conference in Copenhagen in 2009, wouldn't you? But instead this was their response:

Mitchell Taylor, who has studied the animals for 30 years, was told his views 'are extremely unhelpful’.

Just because he refuses to be alarmist and tow their party line.
Posted by Climate Observer at 7.9.09