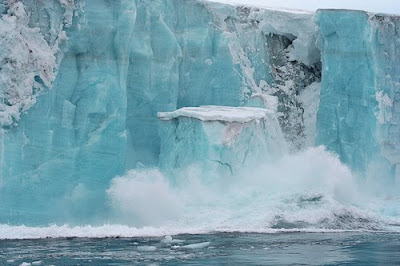 The polar icecaps, in particular the Arctic are probably the most often sited examples of evidence of global warming and climate change. Images or footage such as the one above of calving ice into the sea are invariably used by the media whenever climate change is raised as a topic.

“Polar bears are going to go with the ice cap.”

This is despite the outgoing leader of Greenpeace has admitted his organization’s recent claim that the Arctic Ice will disappear by 2030 was “a mistake.”

Under close questioning by BBC reporter Stephen Sackur on the “Hardtalk” program, Gerd Leipold, the retiring leader of Greenpeace, said the claim was wrong.


Sackur said the claim was inaccurate on two fronts, pointing out that the Arctic ice is a mass of 1.6 million square kilometers with a thickness of 3 km in the middle, and that it had survived much warmer periods in history than the present.

Yet UN President Ban Ki Moon continues to recite the Greenpeace propaganda in the lead upto the Climate Change conference due at Copenhagen in November 2009. As does former Democratic Presidential contender Senator John Kerry when he said this:

Greenpeace wasn't even willing to distort the truth that much when it mentioned melting Arctic ice in a July 15 article. The group pinpointed 2030 as doomsday, 17 years later than Kerry.

Dr Taylor agrees that the Arctic has been warming over the last 30 years. But he ascribes this not to rising levels of CO2 – as is dictated by the computer models of the UN's Intergovernmental Panel on Climate Change and believed by his PBSG colleagues – but to currents bringing warm water into the Arctic from the Pacific and the effect of winds blowing in from the Bering Sea.

What is not true about how it was reported was that this is the “first time” ever that this has happened.

What is true is that the measurements, which are done by satellite, go back only 29 years.

What is also true is that the North-West Passage, a good proxy for Arctic sea-ice extent, was also open to shipping in 1945, or that Amundsen passed through in a sailing vessel in 1903. As can be seen by this map.

The dramatic melting of 2007 was followed by an Equally dramatic recovery. Feb. 08 figures from the respected US National Oceanic and Atmospheric Administration show that almost all the “lost” ice has come back.

Ice levels which had shrunk from 13million sq km in January 2007 to just four million in October, are almost back to their original levels.

So from mid September to mid February (less than six months) the Artic had replaced approximately 9 million square kilometres of sea ice.

The Alarmists, however, were now in full flight about the 2008 melt:

“We’re actually projecting this year that the North Pole may be free of ice for the first time,” claimed Dr David Barber, of Manitoba University .

“Have we passed the tipping point?”, “It’s hard to see how the system may bounce back (this year),” fretted Dr Ignatius Rigor, of Washington University’s polar science centre.

“this may be the Arctic’s first ice-free year”, worried Dr. Tim Flannery.

“Here you can see climate change happening before your eyes.” wailed the ABC and Age reporter Marian Wilkinson.

Lewis Pugh, the U.K.-based explorer, athlete, climate crusader and maritime lawyer whose 2007 North Pole swim drew headlines around the world, is back with a dream to kayak from Norway to the Pole to draw attention to global warming…

After last year’s record-breaking loss of sea ice in the Arctic, many scientists are predicting that waters all the way up to the North Pole will be largely ice-free by the end of the summer.
“It wouldn’t have been possible to do this kayak even last year,” said Pugh. “The Arctic has changed so much in just one year.”

However, when he attempted to do so, it was finally reported Lewis saying: “We’re stuck”. So where did Lewis get stuck? At about 69 miles per degree of latitude, it would seem that they’re still 600+ miles from the North Pole.

Conveniently forgotten, is that in 1893 the Arctic was so ice free that a Norwegian explorer was able to kayak above 82 degrees north, 100 miles nearer the Pole. 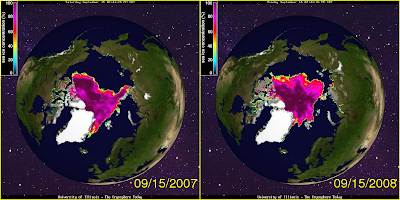 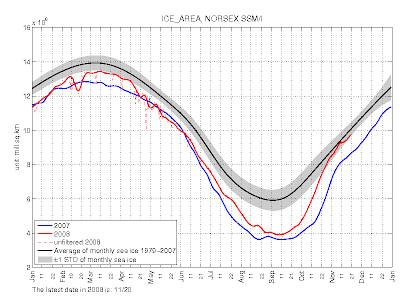 The facts are that although there was another large melt in 2008 (the second lowest since satellite measurement began in 1979), it was still 10% higher than 2007 as seen in the picture above and the graph down below.

Confirmed by The National Snow and Ice Data Center (NSIDC) in Boulder, Colorado who said:

UI (University of Illinois) is calculating ice area, while NSIDC is calculating ice extent, two different but related indicators of the state of the ice cover. However, both yield a consistent change between Aug. 12, 2007 and Aug. 11, 2008 – about a 10% increase.

This melt was again followed by a very rapid recovery and by early November was back to average. 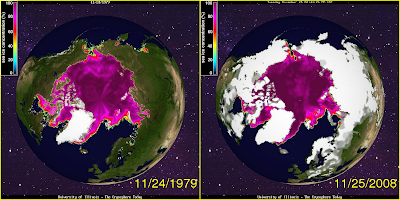 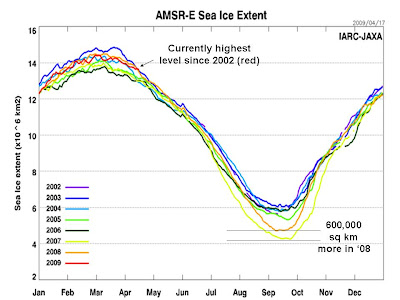 So what did the Arctic look like by the end of the year? The top figure above is a comparison between the 25th Nov 2008 and 24th Nov 1979. The ice extents are approximately the same. So where is the melted ice cap?
In an article entitled "What melts the Arctic?" it explains why this was not climate change:

The Arctic did not experience the meltdowns forecast by NSIDC and the Norwegian Polar Year Secretariat. It didn’t even come close. Additionally, some current graphs and press releases from NSIDC seem less than conservative. There appears to be a consistent pattern of overstatement related to Arctic ice loss.

We know that Arctic summer ice extent is largely determined by variable oceanic and atmospheric currents such as the Arctic Oscillation. NASA claimed last summer that “not all the large changes seen in Arctic climate in recent years are a result of long-term trends associated with global warming”.

The media tendency to knee-jerk and blame everything on “global warming” makes for an easy story - but it is not based on solid science.

So where did itend up in 2009 at the height of it's melt season? 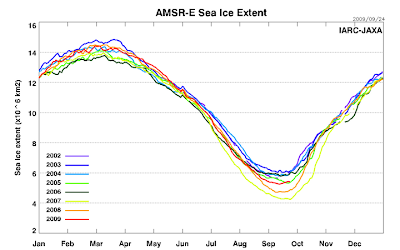 Better than both '07 and '08. After which it quickly recovered to be better than the '05 melt as well. So the Summer melt is slowly on the improve again despite the continued rise in CO2 during that time. Showing another disconnect between what we are being told and what is actually happening. The only reason why 2009 had that final dip below the 2005 line was the return of the South Easterly winds that caused the 2007 melt. As seen in this NSIDC page listed as "A change in ice motion slows seasonal decline."
Posted by Climate Observer at 3.9.09