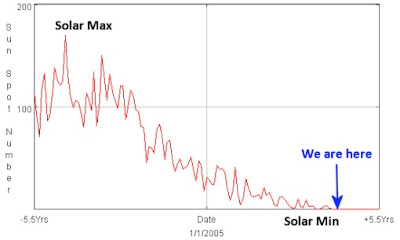 The figures above show the current progress in the development of Solar Cycle 24. As the bottom figure shows we should by now be experiencing a great many more sunspots than we currently are.

Joseph D’Aleo (CCM, AMS Fellow) has been keeping track of the transition of the sun from solar cycle 23 to cycle 24. The transition is to do with the cycle of sunspots which (on average) lasts 11 years from minimum to maximum and back to minimum but in truth can vary considerably in
length from year to year.

This is what he has found:

2008 will be coming to a close with yet another spotless days according to the latest solar image. This will bring the total number of sunspotless days this month to 28 and for the year to 266, clearly enough to make 2008, the second least active solar year since 1901.

The total number of spotless days this solar minimum is now at around 510 days since the last maximum. The earliest the minimum of the sunspot cycles can be is July 2008, which would make the cycle length 12 years 3 months, longest since cycle 9 in 1848. If the sun stays quiet for a few more months we will rival the early 1800's, the Dalton Minimum which fits with the 213 year cycle which begin with the solar minimum in the late 1790's. 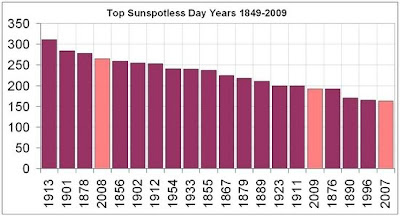 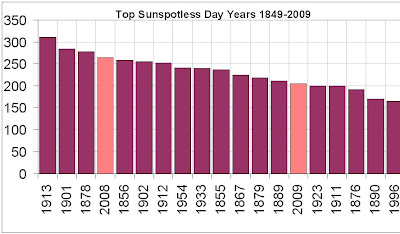 The figure above shows where 2007 and 2008 ended up in the top twenty spotless years since 1849. It also shows the progress of 2009 up to September of that year.

So what is the Dalton Minimum and why is this significant? 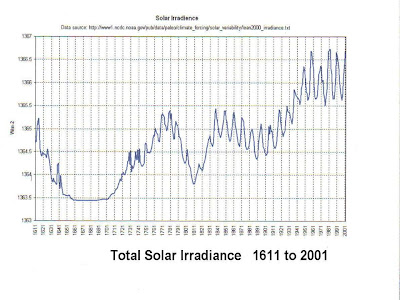 Examining the two figures above. The top one shows sunspot numbers and the bottom one total solar irradiance over the same period (notice any correlation ? ). This is explained in an article by Dr’s Willie Soon and Steven H. Yaskell :

The year 1816 is still known to scientists and historians as “eighteen hundred and froze to death” or the “year without a summer.”

1816 marked the midpoint of one of the Sun's extended periods of low magnetic activity, called the Dalton Minimum. This particular minimum lasted from about 1795 to the 1820s. It resembled the earlier Maunder Minimum (about 1645-1715) that was responsible for at least 70 years of abnormally cold weather in the Northern Hemisphere. The Maunder Minimum interval is sandwiched within an even better known cool period known as the Little Ice Age, which lasted from about the 14th through 19th centuries.

So the correlation is that in times of minimal solar sunspot activity the temperature can fall quite dramatically and stay very low for a long time. This is causing concern for some scientists who speculate that if this continues, we may in fact be facing another “ice age” rather than “global warming”. We have already witnessed a fall in temperature from 2002 and this increased markedly in 2007. despite a rising CO2 level both of which incidentally are less than the IPCC predicted. 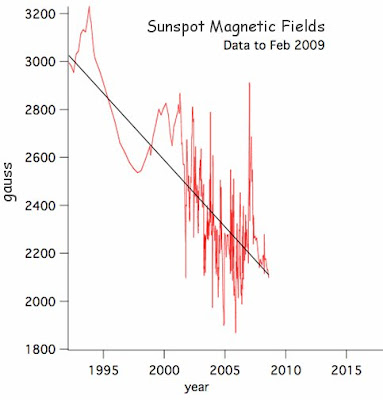 NASA has even written an article entitled: Are Sunspots Disappearing? in it it says:

The sun is in the pits of the deepest solar minimum in nearly a century. Weeks and sometimes whole months go by without even a single tiny sunspot. The quiet has dragged out for more than two years, prompting some observers to wonder, are sunspots disappearing?

“Personally, I’m betting that sunspots are coming back,” says researcher Matt Penn of the National Solar Observatory (NSO) in Tucson, Arizona. But, he allows, “there is some evidence that they won’t.”

Penn’s colleague Bill Livingston of the NSO has been measuring the magnetic fields of sunspots for the past 17 years, and he has found a remarkable trend. Sunspot magnetism is on the decline:

“Sunspot magnetic fields are dropping by about 50 gauss per year,” says Penn. “If we extrapolate this trend into the future, sunspots could completely vanish around the year 2015.”

This disappearing act is possible because sunspots are made of magnetism. The “firmament” of a sunspot is not matter but rather a strong magnetic field that appears dark because it blocks the up flow of heat from the sun’s interior. If Earth lost its magnetic field, the solid planet would remain intact, but if a sunspot loses its magnetism, it ceases to exist.

“According to our measurements, sunspots seem to form only if the magnetic field is stronger than about 1500 gauss,” says Livingston. “If the current trend continues, we’ll hit that threshold in the near future, and solar magnetic fields would become too weak to form sunspots.”"This work has caused a sensation in the field of solar physics,” comments NASA sunspot expert David Hathaway, who is not directly involved in the research. “It’s controversial stuff.”

The controversy is not about the data. “We know Livingston and Penn are excellent observers,” says Hathaway. “The trend that they have discovered appears to be real.”

...If sunspots do go away, it wouldn’t be the first time. In the 17th century, the sun plunged into a 70-year period of spotlessness known as the Maunder Minimum that still baffles scientists. The sunspot drought began in 1645 and lasted until 1715; during that time, some of the best astronomers in history (e.g., Cassini) monitored the sun and failed to count more than a few dozen sunspots per year, compared to the usual thousands.

“Whether [the current downturn] is an omen of long-term sunspot decline, analogous to the Maunder Minimum, remains to be seen,” Livingston and Penn caution in a recent issue of EOS. “Other indications of solar activity suggest that sunspots must return in earnest within the next year.”

Whatever happens, notes Hathaway, “the sun is behaving in an interesting way and I believe we’re about to learn something new.”So are there links between the PDO and the Solar Cycles? It seems there might well be:

Is the sun driving our weather? Robert Baker thinks it might. For a decade, he’s been observing that the fluctuations of the Southern Oscillation Index (SOI) can be forecast with reasonable accuracy using the sun’s magnetic cycle.

Dr Baker’s hypothesis, to be published in a scientific journal later this year, is that the interaction between the magnetic fields of the Sun and Earth, ultraviolet radiation, and the way cloud formation is influenced by energy particles issuing from the sun, combine to suggest an alternative reason for the SOI that warrants further investigation.

Is there any other examples of the relationship between total solar irradiance and a earthbound climate system? It would appear there is: 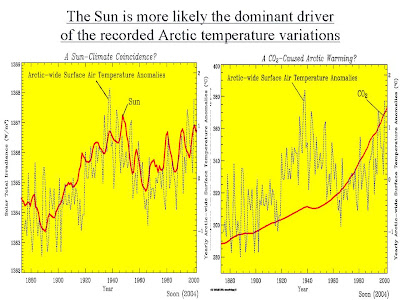 More on this topic can be read through this new article:

NCAR: “number of sunspots provides an incomplete measure of changes in the Sun’s impact on Earth”