Is there any evidence that the ice at the North Pole has had previous times where it has been thin? These photos would suggest there is: 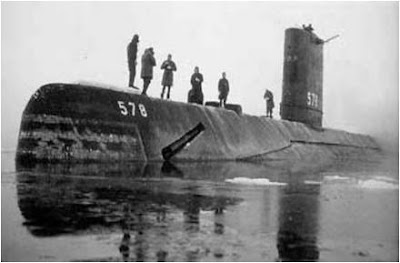 So what did the North Pole look like when the US Skate (SSN-578), surfaced at the North Pole, 17 March 1959 Submarine? The figure above shows this. 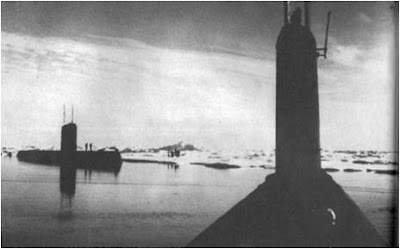 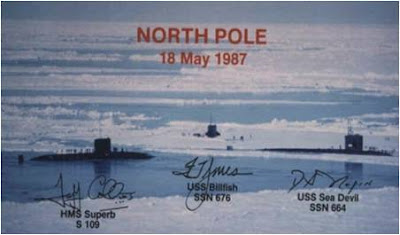 What about 1987? The above figure shows HMS Superb (S109), USS Billfish (SSN 676) and USS Sea Devil (SSN 664) rendezvousing at the North Pole during the start of the melt season. 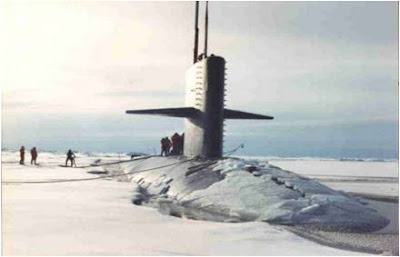 1993 perhaps? The figure above shows the USS Pargo at the North Pole in 1993 showing thin ice. 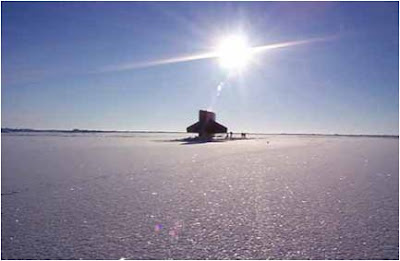 Then finally 1999 when the North Pole should be showing signs of stress from Climate Change? The photo above is of USS Hawkbill at the North Pole, Spring 1999 showing plenty of ice.

The point here is that the ice at the North Pole is dynamic not static and that a wide variance is the norm for this region. Something that seems to be getting forgotten in these days of alarmism and breathless reporting.

A November 2007 peer-reviewed study in the journal Nature found natural cause for rapid Arctic warming. Excerpt:

[The study] identifies a natural, cyclical flow of atmospheric energy around the Arctic Circle. A team of researchers, led by Rune Graversen of Stockholm University, conclude this energy flow may be responsible for the majority of recent Arctic warming. The study specifically rules out global warming or albedo changes from snow and ice loss as the cause, due to the “vertical structure” of the warming ... the observed warming has been much too weak near the ground, and too high in the stratosphere and upper troposphere. This study follows hot on the heels of research by NASA, which identified “unusual winds” for rapid Arctic ice retreat. The wind patterns, set up by atmospheric conditions from the Arctic Oscillation, began rapidly
pushing ice into the Transpolar Drift Stream, a current which quickly sped the ice into warmer waters. A second NASA team, using data from the GRACE (Gravity Recovery and Climate Experiment) satellite, recently concluded that changes in the Arctic Oscillation were, “mostly decadal in nature,” rather than driven by global warming.

A July 2007 analysis of peer-reviewed literature thoroughly debunks fears of Greenland and the Arctic melting and predictions of a frightening sea level rise. Excerpt:

“Research in 2006 found that Greenland has been warming since the 1880s, but since 1955, temperature averages at Greenland stations have been colder than the period between 1881-1955. A 2006 study found Greenland has cooled since the 1930s and 1940s, with 1941 being the warmest year on record. Another 2006 study concluded Greenland was as warm or warmer in the 1930s and 40s and the rate of warming from 1920-1930 was about 50% higher than the warming from 1995 to 2005. One 2005 study found Greenland gaining ice in the interior higher elevations and thinning ice at the lower elevations. In addition, the often media promoted fears of Greenland’s ice completely melting and a subsequent catastrophic sea level rise are directly at odds with the latest scientific studies.” [See July 30, 2007 Report - Latest Scientific Studies Refute Fears of Greenland Melt]. 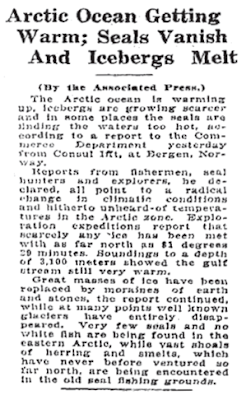 This is not the first time that global warming has been blamed for melting the Arctic. Above is an article from 1922 saying much the same things that we read today.

Dr. Tim Ball wrote a paper in August of 2008 called: Arctic Sea Ice - The Media Darling of Climate Change Misrepresentation. In he wrote about the media’s fascination with the Arctic in particular:

Why Arctic Sea Ice is a Media Darling Arctic and Antarctic regions receive a great deal of attention for Several reasons: a) we know very little about them b) they are regions where the greatest warming due to human CO2 is predicted c) they are home to animal species that have been used to exploit our emotions …Al Gore’s complete misrepresentation of polar bears to the more accurate but very emotional portrayal of Antarctic penguins. 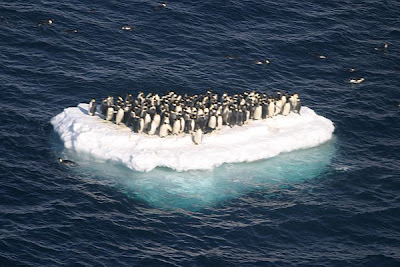 Of course if the melting at the Arctic is caused by global warming then this must be getting recorded in the temperature data during the summer melt season, correct? Well perhaps not! The figure below is the daily mean temperature graph for the arctic during this years melt season. As can be clearly seen the red data line is following the curve and line of green line and is only above the blue line for a short period. So which line is which? The blue line represents the “melting point” of ice in Kelvin or 0°C/32°F The green line represents the average climate from 1958 to 2002, i.e. the “baseline” 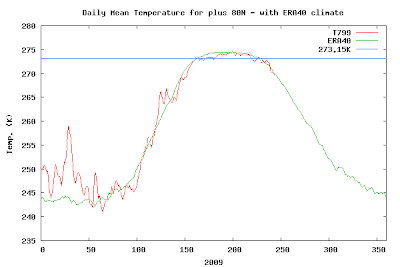 So there is no excess temperature or excess time at the melting temperature being recorded. So what about if we compare it to 1958?

So no real change then! If anything it was less.

Here is a link to an article in Sep 2009 entitled DMI arctic temperature data animation doesn’t support claims of recent Arctic warming which explains the above graphs in more detail.