When it comes to the seas and reefs of the world the other threat is deemed to be from coral bleaching:

In 1999, Hoegh-Guldberg warned that the Great Barrier Reef was under pressure from global warming, and much of it had turned white.

In fact, he later admitted the reef had made a “surprising” recovery.

In 2006, he warned high temperatures meant “between 30 and 40 per cent of coral on Queensland’s great Barrier Reef could die within a month”.

In fact, he later admitted this bleaching had “a minimal impact”.

In 2007, he warned that temperature changes of the kind caused by global warming were again bleaching the reef.

In fact, the Global Coral Reef Monitoring Network last week said there had been no big damage to the reef caused by climate change in the four years since its last report, and veteran diver Ben Cropp said this week that in 50 years he’d seen none at all.

This lack of permanent damage to the Barrier Reef is supported by another article written by Dr. Craig Idso called: Coral Reefs CO2, Global Warming and: Prospects for the Future. Which says:

One of the long-recognized potential consequences of the ongoing rise in the air’s CO2 content is CO2-induced global warming, which has been predicted to pose a number of problems for both natural and managed ecosystems in the years ahead. Of newer concern, in this regard, are the effects that the ongoing rise in the air’s CO2 content may have on coral reefs. It has been suggested, for example, that CO2-induced global warming will do great damage to corals by magnifying the intensity, frequency, and duration of a number of environmental stresses to which they are exposed. The predicted consequences of such phenomena include ever more cases of coral disease, bleaching, and death.

Increases in the atmosphere's CO2 content have also been postulated to possess the potential to harm coral reefs directly. By inducing changes in ocean water chemistry that can lead to reductions in the calcium carbonate saturation state of seawater, it has been predicted that elevated levels of atmospheric CO2 may reduce rates of coral calcification, possibly leading to slower growing – and, therefore, weaker – coral skeletons, and in some cases, death.

Because of these many concerns, and the logical desire of individuals and governments to do something about what they perceive to be bona fide threats to the well-being of the biosphere, it is important to have a correct understanding of the scientific basis for the potential problems that have been predicted. Hence, in the following pages we review the scientific literature on CO2, global warming and coral reefs, in an effort to determine if the ongoing rise in the air’s CO2 content does indeed pose a threat to these incomparable underwater ecosystems. The key findings of this review are as follows:

There is no simple linkage between high temperatures and coral bleaching.

As living entities, corals are not only acted upon by the various elements of their environment, they also react or respond to them. And when changes in environmental factors pose a challenge to their continued existence, they sometimes take major defensive or adaptive actions to insure their survival.

A particularly ingenious way by which almost any adaptive response to any type of environmental stress may be enhanced in the face of the occurrence of that stress would be to replace the zooxanthellae expelled by the coral host during a stress-induced bleaching episode by one or more varieties of zooxanthellae that are more tolerant of the stress that caused the bleaching.

The persistence of coral reefs through geologic time – when temperatures were as much as 10-15°C warmer than at present, and atmospheric CO2 concentrations were 2 to 7 times higher than they are currently – provides substantive evidence that these marine entities can successfully adapt to a dramatically changing global environment. Thus, the recent die-off of many corals cannot be due solely, or even mostly, to global warming or the modest rise in atmospheric CO2 concentration over the course of the Industrial Revolution.

The 18- to 59-cm warming-induced sea level rise that is predicted for the coming century by the IPCC – which could be greatly exaggerated if predictions of CO2-induced global warming are wrong – falls well within the range (2 to 6 mm per year) of typical coral vertical extension rates, which exhibited a modal value of 7 to 8 mm per year during the Holocene and can be more than double that value in certain branching corals. Rising sea levels should therefore present no difficulties for coral reefs. In fact, rising sea levels may actually have a positive effect on reefs, permitting increased coral growth in areas that have already reached the upward limit imposed by current sea levels.

The rising CO2 content of the atmosphere may induce changes in ocean chemistry (pH) that could slightly reduce coral calcification rates; but potential positive effects of hydrospheric CO2 enrichment may more than compensate for this modest negative phenomenon.

Theoretical predictions indicate that coral calcification rates should decline as a result of increasing atmospheric CO2 concentrations by as much as 40% by 2100. However, real-world observations indicate that elevated CO2 and elevated temperatures are having just the opposite effect.

In light of the above observations, and in conjunction with all of the material presented in this review, it is clear that climate alarmist claims of impending marine species extinctions due to increases in both temperature and atmospheric CO2 concentration are not only not supported by real-world evidence, they are actually refuted by it.
Dr John Mclean (PhD, climate data analyst, computer scientist) has also examined the effect of sea surface temperatures on the Great Barrier Reef:

We're often told that the sea temperature along the Great Barrier Reef (GBR) is increasing and that soon the coral will be bleached and the reef be destroyed. But what's the real story according to the data?

The USA's National Oceanographic and Atmospheric Administration (NOAA) has a web page with recent data and maps, along with links to archived data of sea surface temperatures since 1982. The data is matched to grid cells of 1 degree Latitude and 1 degree longitude and from it I extracted the data applying to the GBR Marine Park and calculated the average across the park for each month. 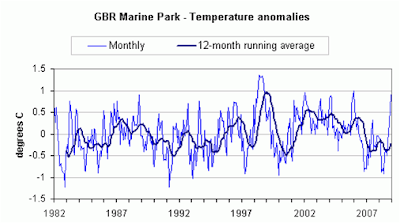 Another method of examining temperature is via the anomaly, which is the variation from the long-term average for that month. The method is not ideal because occasional strong peaks or troughs can distort the average for a particular month and therefore the anomalies, but because global temperatures are usually expressed this way these monthly anomalies are shown in the figure (below), along with the 12-month running average as above. The conventional period used for long-term averages is 30 years but because we only have 27 years of data the monthly averages are those for the entire interval. 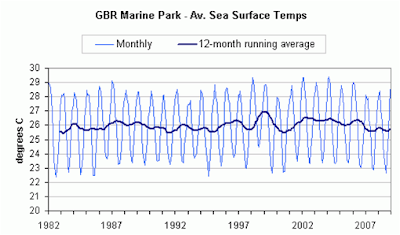 The figure (above) makes it clear that there has been no sustained increase in sea surface temperatures across the Great Barrier Reef over the last 27 years. The graph of the 12-month running average of the SST looks remarkably like the global temperature graphs according to satellite-based monitoring, with a peak in 1998 followed by a fall then another rise and a relatively constant period from 2002 to 2007 and since then a sustained fall.

These graphs make it abundantly clear that the sea surface temperature along Australia's Great Barrier Reef are not increasing at an alarming rate. The people who say otherwise have no evidence whatsoever to support their claims. These sea temperatures might rise in future but the historical evidence suggests that this will most likely be due to the natural forces of El Nino events.
Posted by Climate Observer at 13.9.09