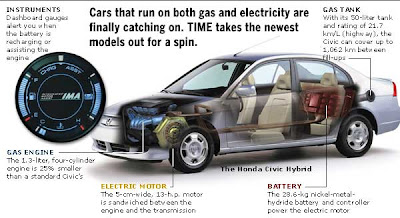 In a solution only a politician could have dreamed up, our governments solution to a problem (CO2 emissions) to stop global warming (that appears to have stopped at least 10 years earlier by itself); is to mandate an insignificant amount of fuel. In order that that insignificant amount be reached we must import fuel from an area Asia that means that rainforest must be cleared and endangered species made extinct. All so they can raise their credentials with the environmental movement, the Greens and the voters. ‘Sir Humphrey Appelby’ of 'Yes Minsiter' fame would be proud.

So what then of the other “Green” revolution for the road, the Hybrid Car? An example in the Honda Civic is shown above. Even this which is seen as a huge step forward by environmental groups has its critics:

When it comes to protecting the environment, senior citizens should concentrate more on the total energy consumed in building and operating a car than its fuel efficiency – no matter how impressive the statistics appear on the window sticker at the showroom.

A prime example is Toyota's Prius, a compact hybrid that's beloved by ardent environmentalists and that fetches premium prices because it gets nearly 50 miles-per gallon in combined highway/city driving. Yet, new data have emerged that show the Prius may not be quite as eco-friendly as first assumed - if you pencil in the environmental negatives of producing it in the first place. Like most hybrids, the Prius relies on two engines - one, a conventional 76-horsepower gasoline power plant, and a second, battery-powered, that kicks in 67 more horses. Most of the gas is consumed as the car goes from 0 to 30, according to alarmed Canadian environmentalists, who say Toyota's touting of the car's green appeal leaves out a few pertinent and disturbing facts.

The nickel for the battery, for instance, is mined in Sudbury, Ontario, and smelted at nearby Nickel Centre, just north of the province's massive Georgian Bay. Toyota buys about 1,000 tons of nickel from the facility each year, ships the nickel to Wales for refining, then to China, where it's manufactured into nickel foam, and then onto Toyota's battery plant in Japan.

That alone creates a globe-trotting trail of carbon emissions that ought to seriously concern everyone involved in the fight against global warming. All told, the start-to finish journey travels more than 10,000 miles - mostly by container ship, but also by diesel locomotive.

But it's not just the clouds of greenhouse gases generated by all that smelting, refining, dealer and trade in their Priuses for Scion xBs. That would be the equivalent of reducing their energy footprint from a size 24D to about a size 5A. In the case of global warming, one small step for man may turn out to be a giant leap for mankind.

Further scrutiny of Hybrid or Electric technology cars is expressed in this article:

The Prius was amortized over 100,000-plus miles for a number of reasons.

The 100,000 mile life expectancy for Prius is time as well as distance sensitive. The historical data shows early Prius models were driven an average of only 6,700 miles per year (rounded). At that rate, the vehicle would require 15 years to reach 100,000 miles. It was our determination that is highly unlikely the '05 or '06 Prius models would still be in active service let alone serviceable 15 years from today.

… competitive vehicles to Prius are being planned by virtually all automakers using either Prius-like dual-mode or plug-in hybrid technology (e.g. Chevrolet Volt). This competition, looking at the historic context which is all we can do, is likely to drive the value of older technology Prius models lower. We've already seen the early stages of this happening with decreasing used values for all of the original batch of hybrids.

Can the Prius be driven more than 100,000 miles? Of course. The vehicle is superbly engineered. …Mechanically, there is no logical reason for the Prius not to last 130,000 miles or more. The latest data shows Prius owners are driving more than early Prius owners and the use of the vehicle is becoming a primary means of transportation in a household rather than a
novelty. But the average annual mileage, outside of certain southern-tier states, remains barely above 7,000 per year.

Other components on the Prius, such as tires, are less distance-mileage friendly than non-hybrids of the same size and weight. For example, surveys of Prius owners by us and other research companies show barely 16,000 miles average life for original-equipment tires compared to 43,000 for Toyota Corolla. This high-tech tire uses a compound and
design that reduces rolling resistance and thus improves fuel economy. But the typical replacement tire for a Prius will not likely be the OEM specialty variety, cutting both fuel economy and distance-per-battery charge of the Prius.

…the energy cost per mile is unequivocally going to decline for Prius over time as the technology continues to spread across other models and the disposal/scrap industry learns how to deal with its high-tech materials and components.

Once again there are hidden aspects to the cars of the green revolution such as a much larger “carbon footprint” in manufacture compared to even a “Hummer”. This is due to the Hummer using many common components with other GM brands and not needing all the special materials to be shipped around the world like the Prius. We see technology that will require new waste disposal methods or improved facilities to handle the amounts of waste that the special batteries will create. Special tyre technology that will have to be replaced more often, and if not replaced with the same expensive technology will dramatically effect its fuel efficiency and performance. The city-highway figures quoted for the fuel economy are aided by the city cycle, where the electric motor is used in braking, idle and slow travel such as car parks. In highway cycle, however, the electric motor and batteries that support it are dead weight as they are not used. Simple physics tells us that the smaller capacity petrol engine has to work harder to overcome all that additional weight, which must effect it’s fuel economy and probably its lifespan. So any
benefits are unlikely to be maximised if the owner does a lot of country miles or kilometres.

The Chevrolet Volt, which used plug in electric technology, has a maximum electric range of 64.4 kilometres, before requiring a recharge of its batteries, which takes a minimum of three hours. Again this technology is useless for any thing but inner city commuting, as it would likely run out of charge between towns in the country or on a round trip from some outer suburbs.

Both these technologies whilst improving are still fraught with many problems, that are glossed over by the environmental movement and a compliant media.