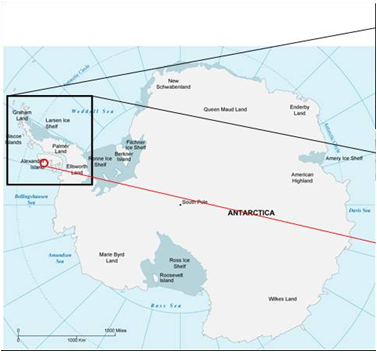 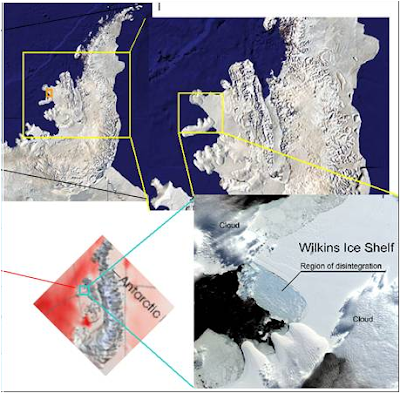 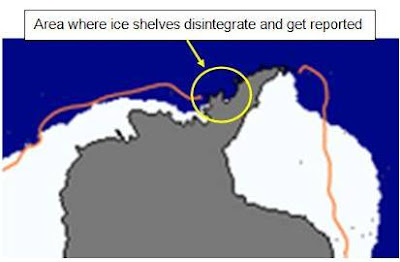 In April of 2009 there was a frenzy amongst the Media as it was reported that the ice bridge on the Wilkins Ice Shelf was disintegrating. Comments like the following were common:

AS IF on cue, an ice wall damming the endangered Wilkins ice shelf against the Antarctic Peninsula has shattered just as scientific alarms ring about the region’s rapid warming.

...the Wilkins shelf began a runaway disintegration… the initial loss of 570 square kilometres in a few days last February raised the alarm..

Antarctic ice shelf half the size of Scotland on verge of collapse.

Of course it's not surprising to see The Age in Australia and The Guardian in the U.K. leading the alarmist charge again.

This in turn led to politicians like Peter Garrett to state:

"I don't think there's any doubt it is contributing to what we've seen both on the Wilkins shelf and more generally in Antarctica," and "experts predicted sea level rises of up to 6m from Antarctic melting by 2100, but the worst case scenario foreshadowed by the SCAR report was a 1.25m rise. "

On April 22nd 2009 he backed away from his prediction of 6 metre rise in sea levels due to melting Antarctic Ice.

This alarmist position on the ice shelfs is disputed by many scientists.

Australian Antarctic Division glaciology program head Ian Allison said sea ice losses in west Antarctica over the past 30 years had been more than offset by increases in the Ross Sea region, just one sector of east Antarctica.

The melting of sea ice -- fast ice and pack ice -- does not cause sea levels to rise because the ice is in the water. Sea levels may rise with losses from freshwater ice sheets on the polar caps. In Antarctica, these losses are in the form of icebergs calved from ice shelves formed by glacial movements on the mainland.

…Dr Allison said there was not any evidence of significant change in the mass of ice shelves in east Antarctica nor any indication that its ice cap was melting. "The only significant calvings in Antarctica have been in the west," he said. And he cautioned that calvings of the magnitude seen recently in west Antarctica might not be unusual.

On 25 March the US National Snow and Ice Data Center (NSIDC) and the British Antarctic Survey (BAS) ( Dr. David Vaughan's group) jointly published an alarmist press statement declaring that the Wilkins Ice Shelf "has begun to collapse because of rapid climate change in a fast-warming region of Antarctica."

I've looked at relevant public data and I'm undecided whether this statement was a gross exaggeration, an inept interpretation of the evidence or borderline fraud, because I can see nothing about the collapse to indicate that it was anything but a natural event.

Even elements of the media were unconvinced:

Is misreporting really necessary to get the global warming message across to the masses?

Or is the claimed fate of the Wilkins Ice Shelf simply a case of too good a photo opportunity to pass up, or in this case, pass off, as caused by anthropogenic climate change?

The news stories are making it sound like the snapping of the last ice bridge between one part of the crumbling shelf and its main body is a portent of doom for a warming planet.

Only a small part of the Wilkins Ice Shelf is affected by this event. It is also located in the Antarctic Peninsula, which is milder and subject to higher snowfall than the main mass of the continent.

The mass of ice involved is dwarfed by many larger ice shelf breakouts studied in great detail over the last 60 years in Antarctica.

It is embarrassing to see scientists and newspapers prostitute themselves in this manner. Are they that desperate to seek inclusion in the politically correct but unscientifically sound association of anything and everything with the truly serious matter of climate change?

Ice shelves are dynamic. Just as dynamic as they have been for millions of years, during glacials and interglacials.

For eons before our species industrialised and inadvertently set in train the massive liberation of fossilized carbon that has changed the composition and dynamics of the atmosphere, the oceans and the land, the ice shelves were doing precisely what the Wilkins is doing today, accumulating and shedding ice.

…But the Wilkins break up displays the same spectacular process of ice shelf growth and disintegration that has been observed throughout polar exploration. Plus a new effect, let’s call it the linear oversimplification of the global warming message regardless of the actual science.

The sharp fault lines in the Wilkins break up are break points, not melt points. They would have fractured that way regardless of whether the Wilkins environment has warmed (or even cooled) by the few degrees that have been claimed for it. There is nothing new either about massive outbreaks of icebergs from ice shelf collapses.

Others like the Guardian/Observer (Publisher of Deep Greens like George Monbiot) were more than happy to recycle photos that were at least twelve months old to hype up their articles (as can be see below): 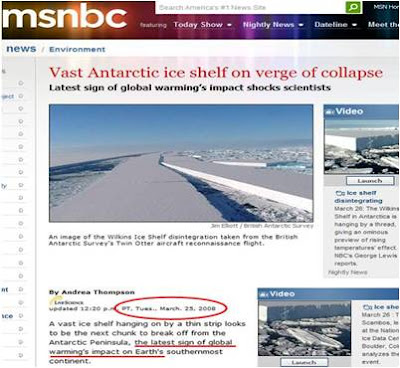 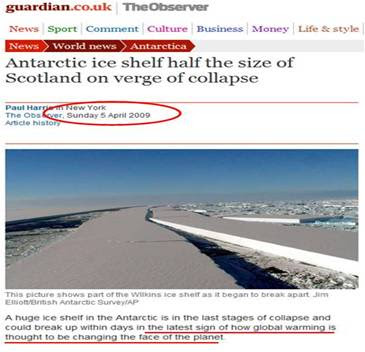 So what is the reality? Here is a graph showing that Antarctica in early 2009 has over a million square km more ice than its 1979-2000 mean. 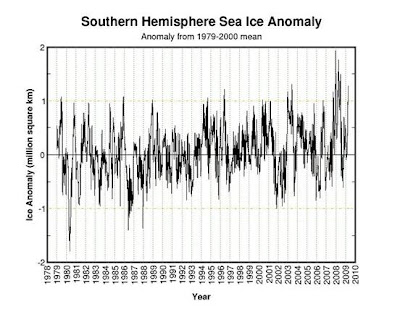 And the Wilkins Ice shelf? From these series of Photos it is easy to see the cycle of melt and refreeze that takes place there. Of course each melt is met with breathless reporting, every refreeze is met with silence from the press like The Guardian and The Age. 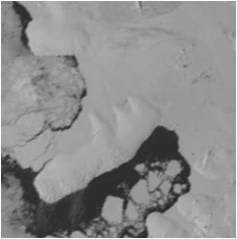 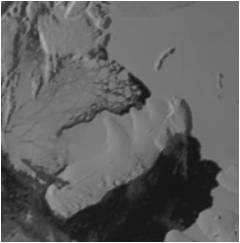 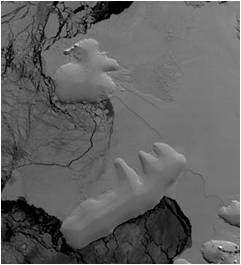 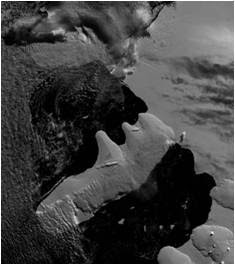 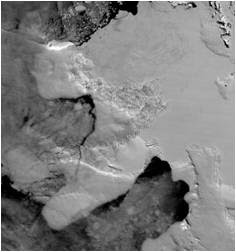 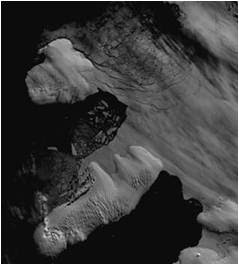 Perhaps we could have a look at how the seaice is progressing at it's peak in late September 2009 from the data at NSIDC. 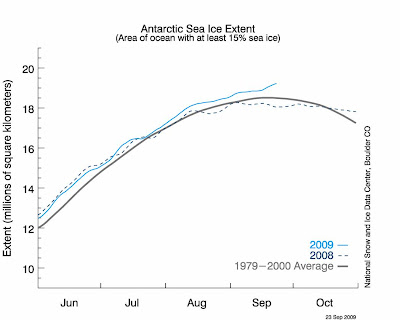 Of course some people or organisations just can't accept good news and celebrate the second year of rises in a row from the 2007 minimum. Instead NSIDC is still pushing “ice-free Arctic summers” with this press release . Of course some organisations couldn't wait even the predicted 5 to 30 years for the Arctic to become ice free. Another computer glitch at Cryosphere Today did it for them on the 13th of Sep 2009 on their frontpage seen below: 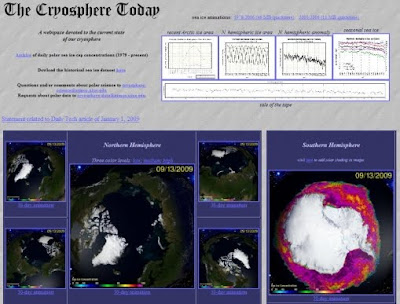 I guess all those white things off to the left hand side were all the polar bears swimming desparately for shore.
Posted by Climate Observer at 5.9.09