Continuing with the solar theme, there are also some theories emerging about links between Cosmic Rays and Solar Winds created by the sun and their influence on the earths climate. 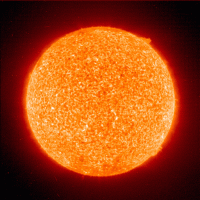 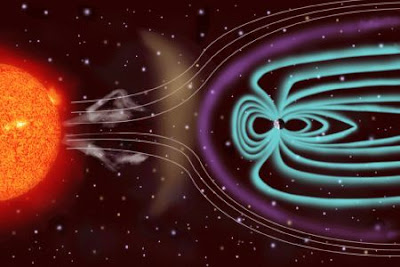 The figure above shows the path of solar winds, but what are they? According to Wiki:

The solar wind is a stream of charged particles—a plasma—ejected from the upper atmosphere of the sun. It consists mostly of electrons and protons with energies of about 1 keV. The stream of particles varies in temperature and speed with the passage of time. These particles are able to escape the sun’s gravity, in part because of the high temperature of the corona, but also because of high kinetic energy that particles gain through a process that is not well-understood.

The solar wind creates the Heliosphere, a vast bubble in the interstellar medium surrounding the solar system. Other phenomena include geomagnetic storms that can knock out power grids on Earth, the aurorae such as the Northern Lights, and the plasma tails of comets that always point away from the sun. 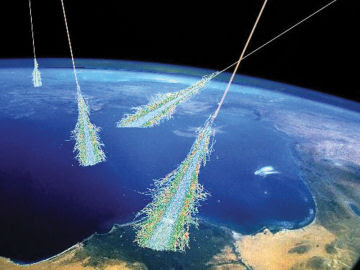 The figure above shows the shower of particles produced when Earth's atmosphere is struck by ultra-high-energy cosmic rays (the most energetic particles known in the universe). Source: Simon Swordy/University of Chicago, NASA.

Numerous palaeoclimatic observations, covering a wide range of time scales, suggest that galactic cosmic ray variability is associated with climate change. The quality and diversity of the observations make it difficult to dismiss them merely as chance associations. But is the GCR flux directly affecting the climate or merely acting as a proxy for variations of the solar irradiance or a spectral component such as UV?

Here, there is some palaeoclimatic evidence for associations of the climate with geomagnetic and galactic modulations of the GCR flux, which, if confirmed, point to a direct GCR-climate forcing. Moreover, numerous studies have reported meteorological responses to short-term changes of cosmic rays or the global electrical current, which are unambiguously associated with ionising particle radiation.

Cosmic ray forcing of the climate could in principle operate on all time scales from days to hundreds of millions of years, reflecting the characteristic time scales for changes in the Sun’s magnetic activity, Earth’s magnetic field, and the galactic environment of the solar system. Moreover the climate forcing would act simultaneously, and with the same sign, across the globe. This would both allow a large climatic response from a relatively small forcing and also give rise to simultaneous regional climate responses without any clear teleconnection path.

The most persuasive palaeoclimatic evidence for solar/GCR forcing involves sub orbital (centennial and millennial) climate variability over the Holocene, for which there is no established forcing agent at present.

…The most likely mechanism for a putative GCR-climate forcing is an influence of ionisation on clouds, as suggested by satellite observations and supported by theoretical and modelling studies. The 31 satellite data suggest that decreased GCR flux is associated with decreased low altitude clouds, which are known to exert globally a net radiative cooling effect.

…Although recent observations support the presence of ion -induced nucleation of new aerosols in the atmosphere, the possible contribution of such new particles to changes in the number of cloud condensation nuclei remains an open question. Furthermore, the parts of the globe and atmosphere that would be expected to be the most climatically sensitive to such processes are unknown, although they are likely to involve regions of low existing CCN concentrations.

Despite these uncertainties, the question of whether, and to what extent, the climate is influenced by solar and cosmic ray variability remains central to our understanding of the anthropogenic contribution to present climate change. Real progress on the cosmic ray- climate question will require a physical mechanism to be established, or else ruled out. With new experiments planned or underway, such as the CLOUD facility at CERN, there are good prospects that we will havesome firm answers to this question within the next few years.

In another article written by NASA in 2008 on Solar Winds reported:

The solar wind is losing power, and is at a fifty year low, according to NASA. The Ulysses solar probe reports a 13% drop in temperature, a 20% drop in density, and a 30% drop-off in the sun’s magnetic field, marking this as the weakest period of solar wind on record (records go back to the 1960’s).

What does this mean? The Heliosphere is thinning, and thus will block fewer cosmic rays. Heinrick Svensmark theorizes that an increase in cosmic rays reaching the Earth will drive cloud formation, increase the planet’s albedo (reflectivity), thus cooling it.

Is this the cause of the Earth’s unusually cool year? According to Anthony Watts, the Earth’s albedo reached a nadir in 1997, and has risen sharply since. Is this related to the weakening of solar activity? We've seen few sunspots in Solar Cycle 24, the solar conveyor belt has slowed to a crawl, and now the solar wind is bottoming out.

This will allow us to see if we are really in the throes of Anthropogenic Global Warming; if temperatures rise (and they haven’t since 1998) then factors other than solar activity are driving climate trends, if not then the greenhouse gas theory is falsified.

Cosmic Rays are also now debunking that other protocol signed in Montreal in 1988 banning the use of CFC's because of their perceived effect on the Ozone layer of the earth.

In an article on Watts Up With That, in September of 2008 it says:

A University of Waterloo scientist says that cosmic rays are a key cause for expanding the hole in the ozone layer over the South Pole — and predicts the largest ozone hole will occur in one or two weeks.

Qing-Bin Lu, a professor of physics and astronomy who studies ozone depletion, said that it was generally accepted for more than two decades that the Earth’s ozone layer is depleted by chlorine atoms produced by sunlight-induced destruction of chlorofluorocarbons (CFCs) in the atmosphere. But more and more evidence now points to a new theory that the cosmic rays (energy particles that originate in space) play a major role.

In another article written days later it states:

...while this year’s ozone hole is the fifth largest on record, the amount of ozone depleting substances have decreased about 3.8% from peak levels in 2000. The largest ozone hole ever recorded occurred in 2006, at a size of 10.6 million square miles.

The Antarctic ozone hole reached its annual maximum on Sept. 12, 2008, stretching over 27 million square kilometers, or 10.5 million square miles. The area of the ozone hole is calculated as an average of the daily areas for Sept. 21-30 from observations from the Ozone Monitoring Instrument (OMI) on NASA’s Aura satellite.

So despite man's CFC emissions peaking in the year 2000 and reducing by 3.8% from that peak we have had the largest and fifth largest holes occur over Antarctica six and eight years later repectively.

This is supported by this new paper called: Correlation between Cosmic Rays and Ozone Depletion by Qing.-Bin. Lu, Department of Physics and Astronomy, University of Waterloo, Waterloo, ON, N2L 3G1, Canada.

This Letter reports reliable satellite data in the period of 1980–2007 covering two full 11-yr cosmic ray (CR) cycles, clearly showing the correlation between CRs and ozone depletion, especially the polar ozone loss (hole) over Antarctica. The results provide strong evidence of the physical mechanism that the CR driven electron-induced reaction of halogenated molecules plays the dominant role in causing the ozone hole. Moreover, this mechanism predicts one of the severest ozone losses in 2008–2009 and probably another large hole around 2019–2020, according to the 11-yr CR cycle.

Excerpts from the paper:

There is interest in studying the effects of galactic cosmic rays (CRs) on Earth’s climate and environment, particularly on global cloud cover in low atmosphere (3 km) and ozone depletion in the stratosphere. The former has led to a different scenario for global warming, while the latter has provided an unrecognized mechanism for the formation of the O3 hole. The discovery of the CR-cloud correlation by Svensmark and Friis-Christensen has motivated the experiments to investigate the physical mechanism for the correlation. In contrast, the CR-driven electron reaction mechanism for O3 depletion was first unexpectedly revealed from laboratory measurements by Lu and Madey. Then the evidence of the correlation between CRs, chlorofluorocarbon (CFC) dissociation, and O3 loss was found from satellite data by Lu and Sanche: the O3 hole is exactly located in the polar stratosphere and at the altitude of 18 km where the CR ionization shows a maximum.

CRs are the only electron source in the stratosphere, while halogen(Cl, Br)-containing molecules are long known to have extremely large cross sections of dissociative attachments of low-energy electrons. The latter reaction will be greatly enhanced when halogenated molecules are adsorbed or buried at the surfaces of polar molecular ice, relevant to polar stratospheric cloud (PSC) ice in the winter polar stratosphere, as firstly discovered by Lu and Madey and subsequently confirmed by others in experiments and theoretical calculations.

So the question has to be asked are we rushing to yet another false conclusion about CO2 as it now appears we may have with CFC's.
Posted by Climate Observer at 18.9.09