Now take the island of Tuvalu. As we discovered in an earlier post:

...the tide-gauges maintained until recently by the National Tidal Facility of Australia show a mean annual sea-level rise (of 0.07 mm per year) over the past half-century equivalent to the thickness of a human hair. 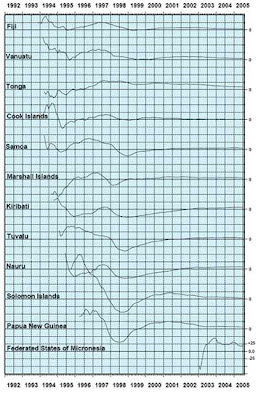 Above is the sea level trends recorded in the South Pacific by the National Tidal Facility. 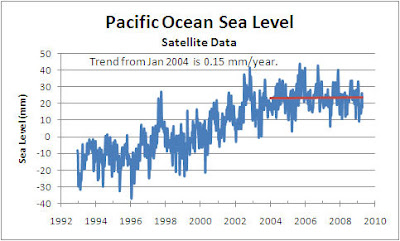 But it would seem there maybe another explanation to Tuvalu’s perceived sinking: Tuvalu is subject to subterranean movement of tectonic plates, which causes it to rise and fall. Every single island used as an example of sea level rises suffers from this same situation.

But the alternate explanations don’t stop there according to Dr. Chris de Freitas (PhD, professor in the School of Geography, Geology and Environmental Science at the University of Auckland) :

There is some inundation evident on islands in Tuvalu, but global warming is not the cause. It is the result of erosion, sand mining and construction projects causing an inflow of sea water. Other factors are also involved. Excessive use of freshwater for irrigation also causes destruction of underground freshwater reservoirs. A consequence is seawater encroachment into vegetable growing pits is occurring, but is not due to sea level rise.

Part of the problem is related also to the paving of the roads and the runway on Funafuti. According to estimates, about one quarter of the island has been paved over. The effect of this has been to reduce infiltration of rainwater into the freshwater lens. When this increased runoff is combined with a high tide, flooding along the coast looks like the sea level is rising. 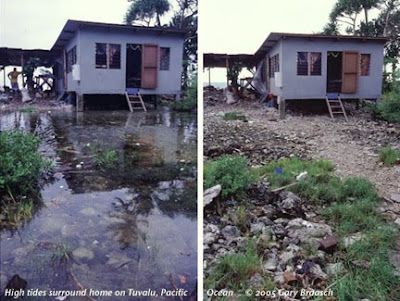 Perception of trends can also be affected, as increasing population on the islands means people are now living on flood prone land that was previously avoided.

Coral is capable of growing faster than most if not all past rates of sea level rise. The atolls are not static.

The islands grow as they are replenished by coral that breaks off the reefs and is thrown ashore by storms. In that way atolls are self-maintaining, provided humans don't intervene, such as by digging the coral for use in construction work, and building flush toilets that discharge the effluent into the sea and where it affects coral growth.

So many of Tuvalu’s problems may well be manmade, but rising CO2 levels are not amongst them. A recent report (2008) stated that the sea levels at Tuvalu have recently fallen by about 4mm. But what of other low lying areas such as the Maldives or even Holland in Europe?

We covered the Maldives earlier, but just to refresh:

a detailed recent study showed that sea levels were unchanged today compared with 1250 years ago, though they have been higher in much of the intervening period, and have very seldom been lower.

A well-established tree very close to the Maldivian shoreline and only inches above sea level was recently uprooted by Australian environmentalists anxious to destroy this visible proof that sea level cannot have risen very far.

Can’t give the public a visible reference point, can we?

The Maldives have a uniquely position in sea level research. In the last decade, they have attracted special attention because, in the IPCC-scenario, the Maldives would be condemned to become flooded in the next 50-100 years. Our research data do not lend support to any such flooding scenario, however. On the contrary, we find no signs of any on-going sea level rise. Our results comes from visits to numerous islands including extensive work on Hulhudoo and Guidhoo in the north, in Viligili and Loshfuchi in the middle, and in Addu in the south. This includes coring, levelling, sampling and dating (35 C14-dates). Present sea level was reached at about 4500 BP. 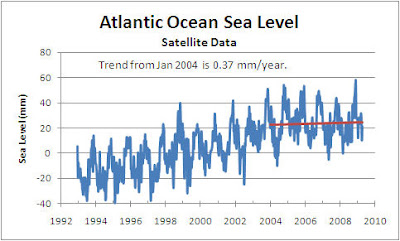 A clear response from KNMI, the Royal Netherlands Meteorological Institute. In a November 10 message to the director-in-chief of KNMI, I suggested that the Institute should contemplate issuing a low-end estimate for sea-level rise, in order to balance the alarmist furor sweeping the country. This is exactly what KNMI decided to do. In an op-ed piece in the December 11 issue of NRC/Handelsblad, Wilco Hazeleger, a senior scientist in the global climate research group at KNMI, writes:

“In the past century the sea level has risen twenty centimeters. There is no evidence for accelerated sea-level rise. It is my opinion that there is no need for drastic measures. It is wise to adopt a flexible, step-by-step adaptation strategy. By all means, let us not respond precipitously.”

This opinion, is further supported by this statement by Professor Marcel Stive (Professor of Coastal Engineering, Delft University of Technology, The Netherlands) :

“Fortunately, the time rate of climate change is slow compared to the life span of the defense structures along our coast. There is enough time for adaptation. We should monitor the situation carefully, but up to now climate change does not cause severe problems for our coastal defense system. IPCC has given lower estimates for the expected sea level rise in four successive reports.”
Posted by Climate Observer at 10.9.09