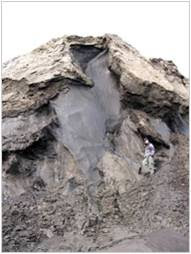 For a scale of the ice wedge in the picture above, note the person standing at the bottom right hand side of it.

In an article released in September 2008 entitled:

One of the potential consequences of a warmer world, according to scientists who study such things, is the deep thawing of the permafrost. Thawing could release huge quantities of carbon into the atmosphere, as vegetation, bones and other organic material, long locked up in the deep freezer that is the permafrost, decompose.

But a study published in Science suggests that the impact of warming on the permafrost may not be as bad as forecast. The evidence comes in the form of a wedge of ancient ice found at an old mining site in the Yukon in Canada.

Ice wedges form in permafrost when the ground cracks because of cold, and spring melt water seeps in and freezes. Over hundreds of years, the wedge builds up, like an in-ground icicle.

Duane G. Froese of the University of Alberta, the lead author of the study, said ice wedges could provide clues to the long-term stability of the permafrost. The problem is figuring out how old they are.

In this case, the top of the wedge was a couple of yards deep in the permafrost, and the researchers found volcanic ash on its top surface. By dating the ash (which presumably came from eruptions in what is now southeastern Alaska), Dr. Froese and his colleagues were able to say how long the ice had been there: about 740,000 years. Because the ash had to have been deposited after the wedge formed, that’s “very clear proof,” Dr. Froese said, that the ice is at least that old.

That means the ice survived several warming periods, including the last major one, 120,000 years ago. “The general view is that everything would have melted out back then,” Dr. Froese said. The new finding suggests that was not the case, and that models of melting need to be rethought.

“But I don’t want people to think we don’t have to worry about global climate change,” Dr. Froese said. The top couple of yards of permafrost are still quite likely to melt as temperatures warm, and there is plenty of carbon stored in them. “But the deeper part of the permafrost is probably relatively stable.”